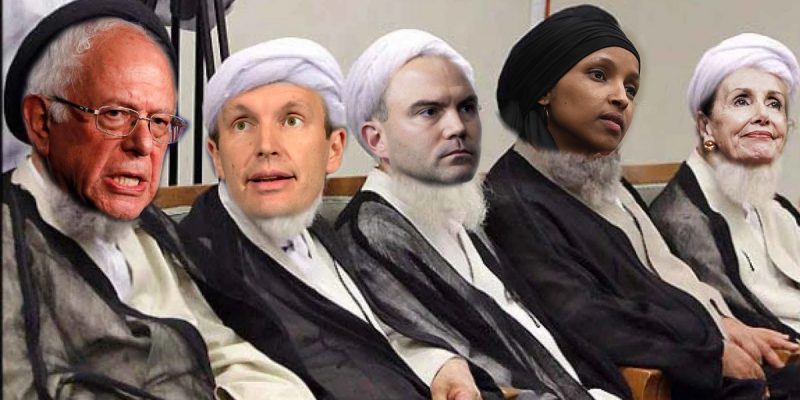 What else should we call the craven and atavistic Democrat Party, which has now assumed with Iran the exact same behaviors it displayed with the USSR during the Cold War, but Iranocrats?

Yesterday, the Trump administration took advantage of perhaps the best opportunity in the history of American counterterrorism. Just two days after Iran-sponsored Kataeb Hezbollah militants, who had rocketed a joint U.S.-Iraqi military base in Kirkuk and killed an American contractor, wounding several others both American and Iraqi, the men in charge of that escalation in the conflict between America and Iran were in Baghdad obviously plotting more mayhem and murder.

Now they are not, thanks to precise American missile strikes which took out a pair of SUV’s carrying Qassem Soleimani, the head of Iran’s Quds Force, which is the world’s largest and most active terrorist army, and Abu Mahdi al-Muhandis, a Soleimani henchman who headed Kataeb Hezbollah on behalf of the Quds Force.

By any military analysis, yesterday’s attack would be defined as counterforce; that is, the airstrike taking out Soleimani and Muhandis was aimed not at the Iranian people or even, per se, its government, but rather at its ability to make war against America. Soleimani’s Quds Force was in charge of the IED factories which made the roadside bombs killing and maiming so many American soldiers in both Iraq and Afghanistan, with a death toll over the years of more than six hundred. Any terrorist responsible for the murder of that many Americans would clearly belong on a list of justifiable targets, and he should have been taken out a long time ago.

But to understand what Trump did yesterday you have to also recognize that the missile taking Soleimani to hell didn’t cross an international border. It didn’t land in Iran. It took him out in Baghdad, not Tehran.

This could not have been more of a measured response to Iran’s countless provocations over the past several months. As Matthew Continetti of the Washington Free Beacon, not an especially pro-Trump publication, notes…

In 2018, Trump withdrew the United States from the Joint Comprehensive Plan of Action negotiated by his predecessor. He began jacking up sanctions. The Iranian economy turned to shambles. This “maximum pressure” campaign of economic warfare deprived the Iranian war machine of revenue and drove a wedge between the Iranian public and the Iranian government. Trump offered the opportunity to negotiate a new agreement. Iran refused.

And began to lash out. Last June, Iran’s fingerprints were all over two oil tankers that exploded in the Persian Gulf. Trump tightened the screws. Iran downed a U.S. drone. Trump called off a military strike at the last minute and responded indirectly, with more sanctions, cyber attacks, and additional troop deployments to the region. Last September a drone fleet launched by Iranian proxies in Yemen devastated the Aramco oil facility in Abqaiq, Saudi Arabia. Trump responded as he had to previous incidents: nonviolently.

Iran slowly brought the region to a boil. First it hit boats, then drones, then the key infrastructure of a critical ally. On December 27 it went further. Members of the Kataib Hezbollah militia launched rockets at a U.S. installation near Kirkuk, Iraq. Four U.S. soldiers were wounded. An American contractor was killed.

Destroying physical objects merited economic sanctions and cyber intrusions. Ending lives required a lethal response. It arrived on December 29 when F-15s pounded five Kataib Hezbollah facilities across Iraq and Syria. At least 25 militiamen were killed. Then, when Kataib Hezbollah and other Iran-backed militias organized a mob to storm the U.S. embassy in Baghdad, setting fire to the grounds, America made a show of force and threatened severe reprisals. The angry crowd melted away.

The risk to the U.S. embassy—and the possibility of another Benghazi—must have angered Trump. “The game has changed,” Secretary of Defense Esper said hours before the assassination of Soleimani at Baghdad airport. Indeed, it has. The decades-long gray-zone conflict between Iran and the United States manifested itself in subterfuge, terrorism, technological combat, financial chicanery, and proxy forces. Throughout it all, the two sides confronted each other directly only once: in the second half of Ronald Reagan’s presidency. That is about to change.

Continetti calls the strike in Baghdad escalatory; in that sense he is incorrect. The Heritage Foundation’s James Carafano, in a Fox News appearance this morning, recognized that defending ourselves by killing the world’s most prolific terrorist is anything but escalatory.

A state of war has existed between the US and Iran since 1979. That can’t be denied. The Iranian regime sponsored the taking of more than fifty American hostages at our embassy in Tehran that year, as it first began whipping up crowds to chant “Death To America” in its streets. It then sponsored the rise of Hezbollah in Lebanon which turned Beirut into a war zone. Hezbollah was responsible for the truck bomb which killed 307 people at the joint US/French barracks in Beirut, taking out peacekeepers from a multinational force intended to put a stop to the killing Hezbollah had stoked in that country’s civil war at the behest of the Iranian regime. Iran has interfered with shipping in the Persian Gulf countless times since then, they’ve taken hostages, they’ve conducted assassinations, they’ve attempted to spread nuclear technology while working toward their own nuclear weapons…the list of atrocities and acts of war committed by that regime is almost endless.

And the victims of that regime are far more domestic than international. Just last week Iran admitted to killing more than 1,500 of its own citizens for the sin of demonstrating in the streets in November for basic human freedoms and against the mismanagement of that country’s economy the regime is guilty of. Chants of “no money, no gas, screw Palestine” are frequent at those demonstrations, meaning that Iran’s foreign adventurism and wasting resources on promoting international bloodshed while depriving its own citizens of prosperity are a source of disgust for its own people – and for their voicing of that disgust they’re murdered in the streets. There may be more Iranocrats in the Democrat Party than in Iran.

So naturally, taking out the tip of Iran’s spear brings on a torrent of invective by the Democrat Party in the United States, a party made up, now, of people we ought to call Iranocrats. We bring you Bernie Sanders…

“Trump’s dangerous escalation brings us closer to another disastrous war in the Middle East that could cost countless lives and trillions more dollars,” Sanders wrote on Twitter after Iranian Gen. Qasem Soleimani died Thursday evening in a U.S. airstrike in Baghdad, Iraq. “Trump promised to end endless wars, but this action puts us on the path to another one.”

Bernie Sanders says he was right, but he doesn’t talk about the fact he was openly on the side of the Soviet Union, at the time the world’s leading enemy of peace and security, throughout the Cold War. Now he’s attacking an American president for defending the country against the current enemy. At some point one starts to recognize Bernie Sanders as a domestic enemy, and then it’s time to debate what should be done about him. Without question, he’s one of the Iranocrats.

There is also the idiot Chris Murphy, a nondescript Democrat senator from Connecticut who can’t decide what he thinks about Trump’s actions other than that they’re bad because they’re from Trump. There was this…

“The justification for the assasination [sic] is to ‘deter future Iranian attacks’. One reason we don’t generally assasinate [sic] foreign political officials is the belief that such action will get more, not less, Americans killed. That should be our real, pressing and grave worry tonight.”

…which came following this, on New Year’s Eve…

The attack on our embassy in Baghdad is horrifying but predictable. Trump has rendered America impotent in the Middle East. No one fears us, no one listens to us. America has been reduced to huddling in safe rooms, hoping the bad guys will go away. What a disgrace.

That inconsistency is part and parcel of the Democrats’ whipsawing statements.

To make any sense of the nonstop braying and screaming, essentially the position of the Iranocrats is that American policy toward that country was most cogent and defensible when it entailed sending them planeloads of cash on pallets while turning a blind eye toward nonstop provocations and the Iranian takeover of Iraq’s government. That approach resulted in Iran taking boatloads of U.S. naval personnel hostage in the Persian Gulf and humiliating America, and no, it didn’t stop their pursuit of nuclear weapons.

At some point it needs to be understood that these guys aren’t just reflexively opposed to Trump. They’re also opposed to U.S. national interests as well. The Iranocrats not isolationists, after all; if they were, there might be some consistency. But these are the same people who cheered and beat their chests over the Arab Spring and the assassination of Libyan dictator Muammar Qaddafi, which led to the Benghazi disaster and the rise of ISIS. They’re globalists. What they don’t like is America playing a leading role in the world, and they never have.

And if you listen to the Iranocrats long enough, you’ll see that pattern emerge from all the politically-opportunistic nonsense they spew.

Let’s not forget who the Iranocrats are, and let’s act accordingly in November.