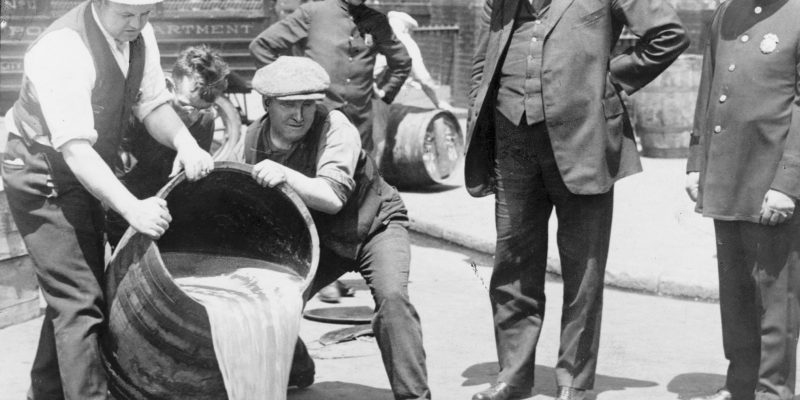 Before some Texans raise a pint to National Bootlegger’s Day, they may want to keep an eye out for prohibition efforts still in place.

National Bootlegger’s Day, Jan. 17, commemorates the birthday of famous mobster Al Capone and the anniversary of the founding of particular brand of whiskey that marketed the contrived holiday in the first place. It’s also the day after National Prohibition went into effect in 1920 — the day bootlegging became big business during the Roaring Twenties.

And though National Prohibition ended on Dec. 5, 1933 with the 21st Amendment (also a holiday brought to us by adult beverages marketers), homemade distilleries are still being confiscated and undercover agents yet lurk about in bars and beer joints in the Lone Star State.

This weekend the “Cops in Shops” program will be rolled out for a trial run by the Texas Alcoholic Beverage Commission (TABC). TABC agents are expected to be increasing its presence in downtown Austin — reportedly part of Gov. Greg Abbott‘s plan to increase public safety in the downtown area and near the University of Texas main campus in wake of a massively unpopular and ineffective homeless camping ordinance that has led to an uptick in violence in and around bars and clubs. TABC officers, in cooperation with local bars and restaurants, will be in plainclothes ready to enforce the law.

This comes on top of an extended “No Refusal” period that lasted from Nov. 28 and ended just after New Year’s Day. During No Refusal weekends and periods, police detectives will be able to apply for blood search warrants from judges waiting inside of mobile trailers, in which a suspect must consent to a blood or breath sampling or be taken to jail. Austin Police reported 143 DWI-related No Refusal period arrests during Independence Day weekend, Halloween, and the Austin City Limits Festival.

Elsewhere around Texas, unlicensed distilling equipment is at risk of confiscation — still a crime to assemble or possess.

TABC agents, according to a press release received via email, recently removed an illegal still from a residence near Lake Jacksonville in Cherokee County after hearing reports that an individual was using an old beer keg to distill moonshine in violation of state law. The distiller received a warning.

Texas law does allow legal-aged individuals to home brew up to 200 gallons of wine or beer per year, but that does not extend to distilled spirits, which may only be manufactured by holders of a TABC Distiller’s and Rectifier’s Permit. Illegally produced spirits, which often feature an unusually high alcohol content, can risk public safety, according to TABC Executive Director Bentley Nettles.

“You never know exactly how much alcohol you’re consuming with these types of spirits,” Nettles said, via the press release. “We’ve also seen cases where additives such as flavoring or even lead leeched from the still itself can make a drink unsafe for human consumption. The equipment itself is extremely sensitive and can lead to dangerous explosions in the hands of inexperienced operators.”

There’s that. For those who feel the laws are fascist, they can look to the 86th Legislature which significantly increased the rights of purveyors of beverage alcohol — from consumer delivery permits to direct brewery sales. TABC has a session update here.