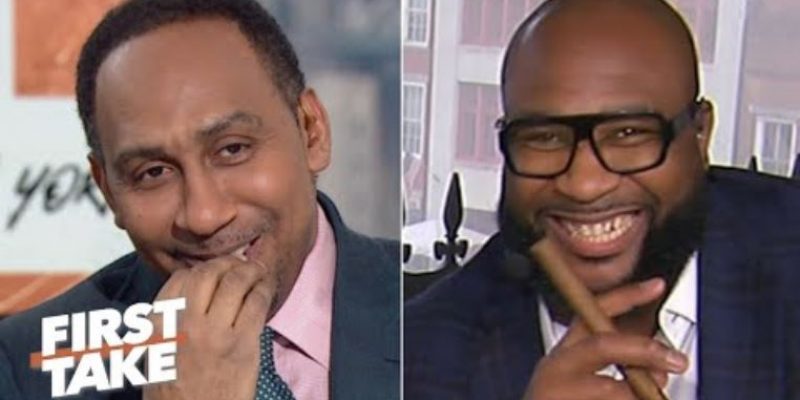 As loud as he can be, the man sure can stoke a flame and create a form of entertainment that finds you smiling to yourself without even realizing it.

ESPN analyst Stephen A Smith was silenced back in November by ESPN colleague and former Tiger Marcus Spears. That staged squabble followed the LSU-Alabama game in which the Tigers proved Smith dead wrong in his assumptions.

Prior to Monday’s national championship game, Clemson coach Dabo Swinney had ribbed Smith about the ESPN analyst always picking against his Tigers in recent championship games. It was for this reason that Smith picked Clemson to beat LSU.

This time Spears had an accomplice in former Tiger Ryan Clark. The two sat back, smoking cigars in New Orleans and spending over six minutes creating some fun at the expense of Smith.

And in very similar fashion to what he said in the days after the Alabama game, all Smith could generate was a forced “Let me tell y’all something right now, both of y’all…

I’d say one day the man will learn his lesson. But there are no more games to be played this season.

Smith put his hand out in an obliging way and ate his crow. It was all fun and games.

But then he said something truly perplexing.

“I did not know Joe Burrow was like this. I really, I really, I really didn’t believe it, I have to confess. I knew the brother could play. I saw Alabama. You know how I felt about that, but in the same breath, I’m like, yo, ok, one-year wonder. There’s gotta be a fluke, can’t be this real. And this brother with Ja’Marr Chase…”

He derailed his train of thought there to offer his “condolences” to Clemson cornerback AJ Terrell, a first-team All-ACC selection at cornerback, who got torched by Chase, the Biletnikoff winner, for nine catches and 221 yards for a 24.6 ypc average. He also scored two touchdowns.

“My Lord,” Smith said, “did he get scorched…I mean, that’s pretty damn bad.”

That is true, Stephen A, Terrell was pretty damn bad Monday night. But don’t kid yourself. When it comes to recognizing the greatness of LSU and its once-in-a-generation quarterback this year, you were pretty damn bad too. How could you possibly just now be confessing to the fact that Joe Burrow is who he is? Did you really think it was probable that Burrow would not play well, after not once having struggled all year?

Yes, Stephen A. Joe Burrow, this brother, can play. He really is like this. And you put up an AJ Terrell-type performance in not recognizing it all year, especially leading into the biggest stage of them all. That’s pretty damn bad.

But it’s ok, Stephen A. At least we all can laugh about it afterwards. We all know it’s just fun and games. Plus it gives us the honor of getting to see Marcus Spears belly laugh, which is always a treat.

Interested in more national news? We've got you covered! See More National News
Previous Article BIG HEART JOE: Burrow Was Injured the Entire Second Half of Title Game
Next Article Republicans Make Up The 10 Most Popular Governors In The Country, Again