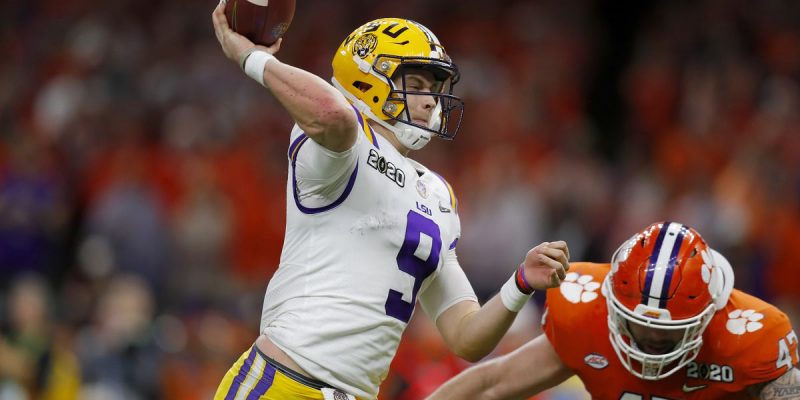 Joe Burrow needs another baseball hat for his hat collection. This one would instead read Big Heart Joe.

There’s a joke associated with that, but I digress with a grin on my face.

Clemson head coach Dabo Sweeney used the movie Rocky IV to motivate his team in the days leading up to the championship game, comparing his Tigers to Rocky, LSU to the prohibitive favorite Ivan Drago, and the city of New Orleans to that other country they had to go fight in.

It turns out that there was a Rocky-type character after all in that game Monday night. But he wasn’t wearing the orange and purple of Clemson.

In the moments after Clemson linebacker James Skalski hit Burrow at the end of the first half, on a touchdown pass to tight end Thaddeus Moss, the senior quarterback was extra careful walking on the sideline. You could tell he was urging his teammates not to touch him.

The man was hurt.

Much like Rocky is hurt, dozens of times in every fight he wages in the fictional boxing ring.

Sideline reporter Holly Rowe said on ESPN Radio that the star quarterback was gasping for air, and that there was real concern he might have suffered a broken rib on the play.

On the first two drives of the second half, Burrow looked ultra-tentative, a shell of the hard-nosed player the nation had come to witness. He was not agile in the pocket and didn’t appear to have the ability or the desire to escape and buy more time. LSU went three-and-out on both series, for a grand total of seven yards.

And the stationary Burrow was sacked twice.

Meanwhile Clemson had closed the gap to 28-25.

They had all the momentum.

But something shifted quite mysteriously and suddenly. After Clemson had to punt after four plays, Burrow seemed to magically return to form, passing for 54 yards and running for 14 on the next drive as the Tigers extended the lead to 35-25.

Maybe the ribs weren’t injured after all. You kind of forgot about it the rest of the game as Burrow sliced and diced Clemson’s No. 1 defense for 463 passing yards and 58 on the ground.

But on Tuesday morning, the truth came out on a podcast from Barstool Sports.

Burrow said he didn’t break any ribs, but suffered a different injury while also recovering from a late night of partying in New Orleans after the win.

“It’s overcoming my violent hangover right now. I’m getting pretty old,” Burrow said. “No, I tore some cartilage in my ribs.”

It hurts to even think about it.

LSU is losing a tough-as-nails quarterback, one who admittedly likes to get hit because it makes him feel more like a football player. He was the perfect personality and fit in extending head coach Ed Orgeron’s philosophy to the team on the field.

Immediately after the game, before the Barstool interview, Burrow had deemphasized the notion that he was hurt the whole second half, telling reporters, “I was fine. I was just fine.”

I was just fine.

With torn cartilage in my ribs.

You get the feeling that if the title game were a heavyweight boxing match Burrow would have told Orgeron one thing:

That Burrow, he’s got one big heart. One really big pain threshold. Proved it week in and week out this season.

And he doesn’t need to put it on any hat to prove it.