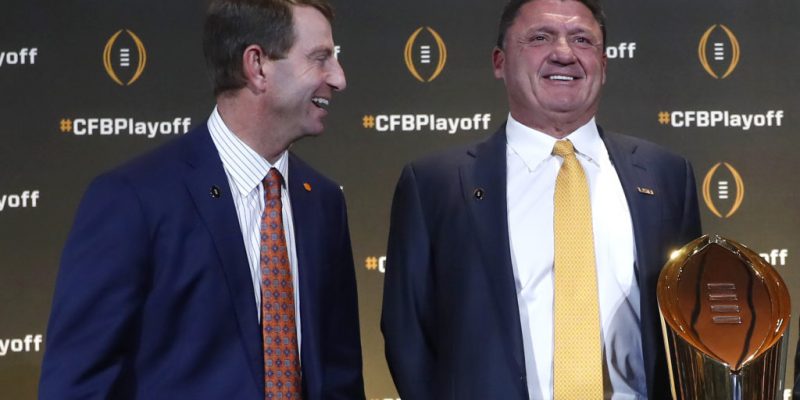 A gimmick is a comic routine, style of performance, or schtick, associated with a particular person.

If Clemson head coach Dabo Swinney isn’t careful, they’ll be laughing out loud at him over at Merriam-Webster and including his name in the very definition.

Over the course of the season, Swinney’s constant use of the underdog card was as obscure as an empty Ziploc bag. Everyone knew what he was doing when he’d complain about his team getting no respect or claiming they would have to go 30-0 to get any of it whatsoever.

In case you don’t know, when he says that, he is adding last year’s 15-0 record to this year’s potential 15-0 record. As if last year’s results matter at all this season.

That’s Dabo Swinney for ya. He’ll say anything to stir up his team and motivate them toward thinking the entire world is against them.

Even when it’s not.

It’s gotten to the point where I literally think “LOL” to myself when I come across any new thing he says. A man who once had a ton of my respect has lost much of it.

To play on the idea that LSU has to travel only 80 miles down I-10 to play in the championship game. To create a scenario where it may seem unfair that Clemson has to play in a pseudo-road game when LSU is in its own backyard.

Even though tickets are not alloted to fans as a real home game is. Even though the site of the national championship is determined years ahead of time.

“We could have just played in Baton Rouge but the weather was going to be bad,” he said.

He furthered the schtick by comparing his team to Rocky going to Russia to fight prohibitive local favorite Ivan Drago.

Said Clemson linebacker Isaiah Simmons: “Everyone here is for LSU. It’s almost like we’re in another country.”

Players will always echo their coach, sure. But the Clemson players know they are good. They know exactly what their coach is doing in trying to motivate them.

But they’re still drinking the Kool-Aid.

Whatever Dabo. Whatever Clemson. I’d rather have a coach who says what LSU head coach Ed Orgeron continues to say.

He said it before the SEC Championship Game against Georgia, when the Tigers had to travel to Atlanta and the Bulldogs’ own backyard. He also said it after that beat-down when he was asked where he thinks his team deserves to be seeded going into the playoffs.

Said Orgeron about Dabo’s Rocky-Drago comparison: “I think those motivational tactics are for the other team…. I couldn’t even tell you who those two guys are.”

Of course Coach O knows who they are. But his disingenuousness stems from a different place: he isn’t concerned about trying to motivate his team with a gimmick. He just wants to line up against the other Tigers on Monday night and kick their ass.

No need for a fancy gimmick.

No need for amateur psychology.

This type of motivational tactic is exactly what Oklahoma went through in the semifinals against LSU. The media, including ESPN’s Kirk Herbstreit, were recognizing their very own lofty expectations for LSU in the game. In the days leading up to the clash, they were predicting that the Sooners would be angry, and would play the Tigers close because of that chip on their shoulder.

You are getting no respect.

You are not as physical or fast.

You can’t stop them.

That last one is exactly what Adrian says to her husband Rocky before he departs for Russia, where he defies the odds and beats Drago.

Thing is, this is real life. Not a movie.

And all of those things turned out to be true for Oklahoma.

That type of mind-play to inspire something you don’t have to inspire in an already good team can backfire, as I suspect it did against the Sooners two weeks ago.

About the time that the Big-12 champions were being dismantled by the start of the second quarter, and Joe Burrow and Justin Jefferson were busy doing their historical magical act, the Sooners–who already had in their heads that “everybody” doesn’t think we’re good enough, let’s get mad about it and win–was instead busy realizing that “everybody” was right.

This LSU team is unstoppable.

And it is going to be a long three quarters before we can even get out of this thing alive.

Oklahoma had half a hundred hung on them in the first half because it didn’t belong on the same field as LSU. If Dabo Swinney isn’t careful, he’ll have his team believing that they aren’t, in fact, good enough to stay with LSU either.

And given the ferocity the Tigers have played with this year, that may very well be true.

Given the fact that Dabo is even going there with this gimmick, he may very well know the truth as well.

And for LSU fans, that is truly a laughing matter.