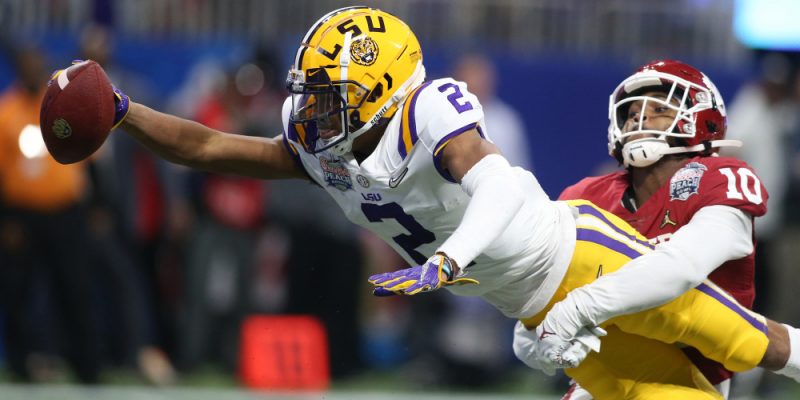 News alert. This just in: LSU Tiger wide receiver Justin Jefferson can play some football. Despite the fact that he’s had to play second fiddle for the latter half of the season.

Twelve days ago I ran an opinion piece on Jefferson’s just deserve for All-American billing, despite the overlooking he has received all post-season.

On Saturday, the junior from St Rose, Louisiana proved once again why he is still second to none not only on this Tiger team, but also in the nation.

And he is certainly not second to CeeDee Lamb.

Jefferson’s teammate Ja’Marr Chase recently won the Biletnikoff Award as the nation’s top wide receiver. This, after it was Jefferson who lit the field on fire for the first half of the schedule, earning him–not Chase–mid-season All-American honors.

Said analyst Kirk Herbstreit on national television early in the season, “This Justin Jefferson is a big, time, receiver at LSU.”

But it was Chase who became Heisman winner Joe Burrow’s more consistent target after the midway point, likely because opposing defenses started trying more in earnest to take Jefferson out of the game. Chase thus turned his prolific year into the Biletnikoff and a unanimous All-American selection.

Jefferson has received no such national recognition, despite these numbers before the Peach Bowl next to Chase and Lamb–the other first team All-American.

After yesterday’s Peach Bowl? The numbers are even more staggering:

On Saturday, Jefferson exploded for 14 catches, 227 yards, and four touchdowns–all of which were in a first half that was more a Tiger demolition job than a football game. Those 227 yards are the most in Peach Bowl, New Year’s Six, and College Football Playoff history as well.

On the biggest stage of the season, he showed why is was and still is second to no one.

With all due respect to Jenna West at Sports Illustrated, Jefferson didn’t just break out yesterday, if in fact that’s what she meant. Apologies to her if it wasn’t.

The truth is that Jefferson has, arguably, been LSU’s best receiver all year. And just as defenses started keying in on him to allow Chase’s breakout campaign, the tables have turned the last two games, as Jefferson was also the star in the SEC Championship three weeks ago with a seven reception, 115-yard, one touchdown performance.

To be fair to the Sooners’ CeeDee Lamb, he did catch four passes for 119 yards yesterday.

But he was nowhere near the electric, dangerous, demolition threat that Jefferson was.

I’ll say it again, even though no one should be changing the rules to move All-American selections to after the season: Justin Jefferson is an All-American. And it is a shame that he won’t be bringing any individual hardware home to prove it.

He’ll have to settle for the chance at a national championship, the ultimate team award he has had such an integral part in.

Yes, Ja’Marr Chase is a pro playing on the college level. Yes, CeeDee Lamb is one heck of a wide receiver and a future pro himself. And it certainly is a neat coincidence that Jefferson wears the No. 2 while his teammate Chase wears No. 1.

But after yesterday everyone in the country should know this: Justin Jefferson is a pro among boys as well, quite clearly second to no one.