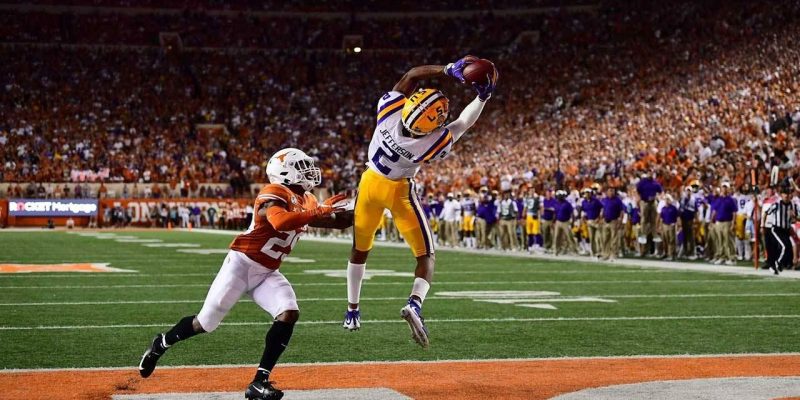 LSU receiver Justin Jefferson did not make the AP or Walter Camp All-American teams this week. Not the Sports Illustrated, USA Today, or ESPN versions either. Not first, second, or third team.

Let’s hope that one of the many post-season All-American teams still to be released, at least one, will recognize Jefferson’s season for what greatness it was.

The College Football All-American Team is composed of over a dozen sources that all comprise their own teams. The Walter Camp Football Foundation (WCFF), the Associated Press (AP), ESPN, USA Today, and Sports Illustrated (SI) recently released their respective lists of the the best players in the country.

Jefferson may not end up being a consensus or unanimous All-American as his partner in crime Ja’Marr Chase will be, but he deserves to be on at least one, just one, of these teams.

Just a week before Thanksgiving, Jefferson was one of twelve finalists for the Biletnikoff Award, awarded to the nation’s top wide receiver.

Now, despite putting up comparable numbers to other receivers named to these early All-American teams, Jefferson is nowhere to be found. This occurs quite often in sports, of course, where there are only so many spots to fill and too many players to fill them. Having his teammate Chase sweep first team honors in these early All-American releases and win the Biletnikoff Trophy doesn’t help Jefferson’s cause.

It is likely that the voters balk at placing two teammates at the same position. Understandable.

Jefferson’s nine-catch, 163 yards, three touchdown night at Texas in the second week of the season displayed not only his talents, but that he was actually the go-to target of Burrow for the first half of the season. Chase would gradually grow into that role, but Burrow’s man was Jefferson early on. The clutch third-and-17 touchdown pass late in the fourth quarter at Texas, Burrow’s first “Heisman moment,” said nothing less.

Chase exploded for a five-game stretch to end the regular season before the SEC Championship Game, and ended up with 73 receptions for 1,498 yards and 18 touchdowns. He straightway earned the Biletnikoff, and he deserves to be on the first team of any All-American release.

But when compared to other receivers receiving recognition from the AP, SI, ESPN, USA Today, and the WCFF, it is clear that Jefferson ranks among the best. It is worth noting that it was CeeDee Lamb of Oklahoma that was named to all five first teams, alongside Chase.

Jefferson obviously compares to all, particularly the other first-teamer, Lamb. It is also interesting to note that it was Jefferson, not Chase, who was named to several midseason All-America teams. The tide turned, yes, but not that much.

In the grand scheme of things, no, it doesn’t matter. Jefferson might very well be a national champion by mid-January and a high round NFL draft pick come the spring. Yes, Ja’Marr Chase is No. 1, in both output this year and his jersey number. But if you’re an LSU fan who has followed the Tigers closely this season, you know that Chase’s late-season explosion did a strange and unintended thing to his teammate–it dwarfed a stellar start to the season, and maybe made people forget exactly how deserving No. 2 is for some hardware for the trophy case.