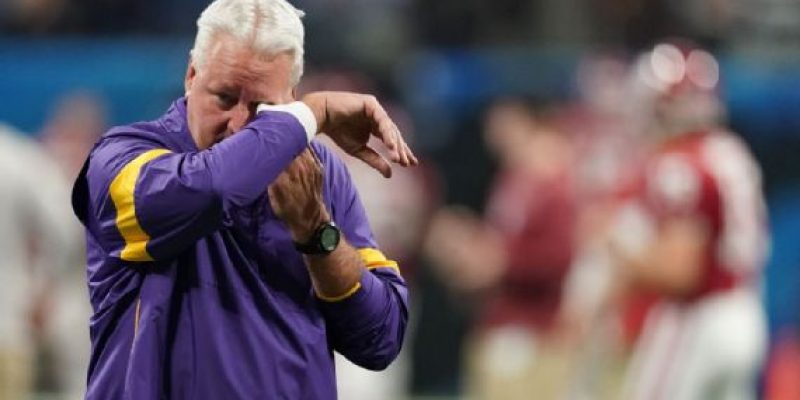 It is Sunday, the Sabbath day, when so many people around the world will be praying to a God maybe they too often forget the other six days of the week. It is easy to forget when life can be so good.

It is even easier to say to a friend in need that “I’ll be praying for you,” and then, not ten seconds later, forget you even said it.

Today isn’t so good for one of LSU’s own. Everyone knows of the tragic death of Carley McCord, offensive coordinator and former Tiger quarterback Steve Ensminger’s daughter-in-law. Of course, there were four others that died, and certainly I as a writer do not want to overlook in any way the enormous devastation those losses will have on the people that loved them.

I will be praying for them as well.

It’s just that I write on sports, and today the team I follow most is involved in one of the most heart-wrenching experiences I can recall as an LSU fan.

I found out the news yesterday just before noon while scrolling through an LSU online forum. I kept the news to myself at first, as I didn’t want to damper the festive family mood in the living room as a baby and a toddler opened Christmas presents. But later I would broach the subject with my brother, who confirmed he’d heard about it too. It turns out that his son, my nephew, has a very real connection with the tragedy as well, one I won’t get into here.

Yes, one of my points in this perspective, personal piece today is the sometimes unbelievable ripple effects tragedies can have on the world. People you wouldn’t even expect to be impacted by such an event, quite simply, are.

I look at the articles now saturating the web, the pictures of Carley McCord and her husband. I think about the images of Coach Ensminger yesterday up in the booth coaching LSU to a resounding victory over Oklahoma, as I was wondering to myself: Right now, what is he thinking? What is he feeling? Is he a man of faith? Is he asking God to help him coach these young men and this team, who deserve his very best today?

It takes a certain someone to be able to lock up such massive pain for four hours and be able to calculate and strategize and compete as an offensive coordinator has to do.

Said Joe Burrow on the tragedy, “Obviously he’s a great man, great family, so I hope the world is praying for him.”

Steve Ensminger has had to take a backseat to his underling Joe Brady all season. Hired from the Saints before the season as passing game coordinator and wide receivers coach, Brady is the one given most public credit for the stratospheric turnaround of LSU’s offense. He is the one who won the Broyles Award, given to the nation’s top assistant coach, not Ensminger, the man above him. It is he who is mentioned when fear circulates the fanbase as to which coaches might be poached by other programs in the offseason. It is Brady’s name that is called when fans hypothetically choose which man they would want to stay if it ever came down to that.

Ensminger has largely been an afterthought this year, and that is a shame.

I’ll even take some heat for that, because I received advice from a friend that I should write on the humility of Steve Ensminger, and I never got around to it.

This article, again as personal and reflective as it is, is my attempt to rectify that. I respect Coach Ensminger and have all year for his humility in allowing his 30-year-old friend and protege to enjoy the limelight without the typical posturing you might find from some of these coaches in the college football playoffs, where anything and everything is somehow turned into a show of disrespect against him and his team. I’m talking about Dabo Sweeney and Ryan Day.

And yesterday, before a national television audience, Steve Ensminger showed once again why he is a man of mettle. He showed the true depth of character that transcends the calculated words and speeches of these coaches who feel they must uncover and expose some grand offense in order to motivate their team.

Yesterday Steve Ensminger just went about his business–as he has all year.

After the game, Tigers head coach Ed Orgeron had nothing but praise for Ensminger’s character.

Indeed, Ensminger and the team got through the afternoon. In historic fashion.

But while the nation gushes over the Tigers’ record-breaking display yesterday, Ensminger will be doing something very different.

He will have to hang up the coach’s hat for just a bit and be a father to his son. Everyone else gets to celebrate. But not him.

He’ll just have to stay in the backdrop and be the man of character he is, without the world watching.

Just as he has all season.

It is why, Coach Ensminger, that while the whole world might not be praying for you and your family today, certainly the entire state of Louisiana is.

Interested in more news from Louisiana? We've got you covered! See More Louisiana News
Previous Article Report: Medicaid expansion has produced ‘disastrous results’
Next Article THIS JUSTIN: Once Again, Tigers’ Jefferson Shows He is Second to No One