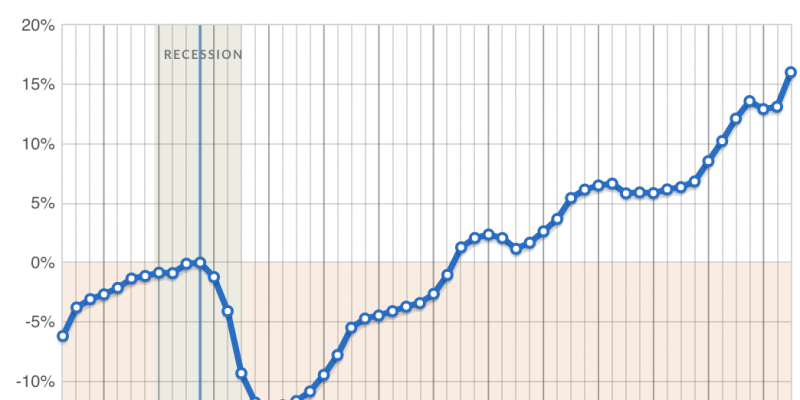 Tax revenue has reached or exceeded levels since before the Great Recession in 45 states, the highest number yet, according to updated 50-state data by the Pew Charitable Trusts.

Mississippi and Missouri lost gains made since their peaks 11 years ago – collecting 1.5 percent and 0.4 percent more, respectively – after falling below for multiple quarters, the report notes.

“Among states that had surpassed their recession-era peaks by 2019’s second quarter, recovery ranged from as much as 71 percent higher tax revenue to less than 1 percent and took from as little as one year to achieve to more than 11 years,” the report states.

Despite revenue gains, state spending increased in the area of Medicaid, with Medicaid enrollment increasing by 55 percent from 2008 to 2017, according to data from the Medicaid and CHIP Payment and Access Commission.

Every state except Illinois spent a larger share of its own dollars on Medicaid in 2017 than in 2000, although Illinois’ decline reflects delayed payments, not cost reductions, the report notes.

“A political stalemate over the state budget led to extreme delays in payments to health care providers,” Pew states. “Unpaid bills from 2017 reportedly inflated spending in 2018, though final data were not yet available.”

Increases varied widely, from less than 1 cent more of each state-generated dollar in Hawaii, Michigan, and Tennessee, to 11.5 cents more in Louisiana.

“States together spent 17.1 cents of every state-generated dollar in fiscal year 2017 to provide Medicaid health care coverage to low-income Americans – nearly 5 cents more than in fiscal 2000 and the largest amount since that year,” the report states.

Previously, the federal government reimbursed states for the full costs of Medicaid expansion.