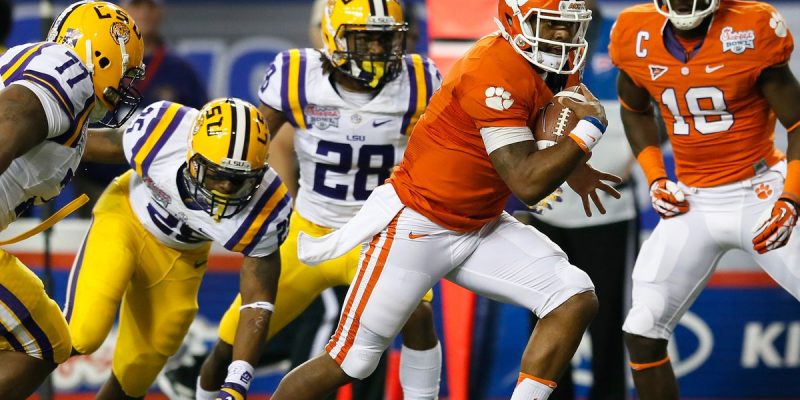 While that may be true, there is something else. This titanic clash has an interesting genesis, one that many fans might not remember.

In the 2012 Chick-fil-A Bowl (now the Chick-fil-A Peach Bowl), the LSU Tigers were heavy favorites against a Clemson program that had been notorious for looking great on paper but inevitably putting up disappointingly mediocre results from year to year. From 2000 to 2011, the Tigers from South Carolina registered the following records:

Middle of the road bowl team, to say the least.

In 2012, however, Clemson had a great regular season at 10-2. The thing that gave the national media pause, however, is that the Tigers had lost to two of the three ranked teams they’d played that season. Still, beating the teams they should have beaten was a step forward in itself, as it had been exactly this problem of losing focus against lesser teams that had forced so many multi-loss seasons in the past.

LSU, on the other hand, was a year removed from a 13-1 run and national runner-up finish. They were a single late scoring drive against Alabama from reaching the SEC title game again in 2012, and had they won that, would have been playing in their second straight BCS National Championship game against a Notre Dame team Alabama would eventually destroy, 42-14.

Had it been LSU playing the Irish, no one in their right mind would have picked against them. It could very easily have been they raising that championship trophy.

It was LSU that was the national power back then, just seven short years ago. Clemson was at best a decent, respectable program, maybe on the rise, maybe not, but certainly a prohibitive underdog to the Tigers from Baton Rouge following the 2012 season.

That all switched on a dime on that New Year’s Eve night in 2012 in the 45th Chick-fil-A Bowl.

An early Clemson fumble and injury to star receiver Sammy Watkins seemed to make matters even more dire for Clemson. Still, they hung tough, and only a missed extra point separated them from a tie at halftime. As it was, LSU led 14-13.

The third quarter belonged to LSU, and it seemed what everyone expected to happen would happen. But the Tigers would squander a 24-13 lead in the fourth quarter, largely because of LSU’s nauseatingly conservative offense that gained a total of one yard in the quarter, and a soft-as-tissue prevent defense implemented by defensive coordinator John Chavis on Clemson’s winning drive.

Especially baffling was a 4th and 16 play Clemson converted from its own 14-yard-line.

A 37-yard field goal as time expired sent Clemson into a frenzy, and into a title run that has led straight to this very national championship clash.

As it continued its climb, Clemson would still fall short of Florida St for two more years, but the dynasty was being established. Here are Clemson’s records since that stunning victory over LSU and 11-2 finish in 2012:

It is not even a fuzzy line. The point of demarcation between the seasons before that LSU-Clemson game in 2012 and what has followed is staggering. After the game, Clemson was in the clouds, clearly a team more motivated to play than a ninth-ranked LSU team who had come so close to championship glory a season earlier, and arguably even weeks earlier. What was a second-tier bowl back in 2012 simply didn’t have the luster for the Tiger players, and it showed in their play, despite the fact that they never trailed until that final field goal.

“This win,” Swinney added prophetically, “is the future of Clemson football.”

Indeed, what a soothsayer Swinney turned out to be. He has become a bit of a thorn in the sides of college football fans with his antics in the media, but one thing is for sure, the man can coach. He is also a believer in divine providence, and that it is all to God’s glory when his team wins.

If that is in fact true, let’s just hope God is an LSU Tiger Monday night, and that a new championship genesis can begin with the purple and gold instead.