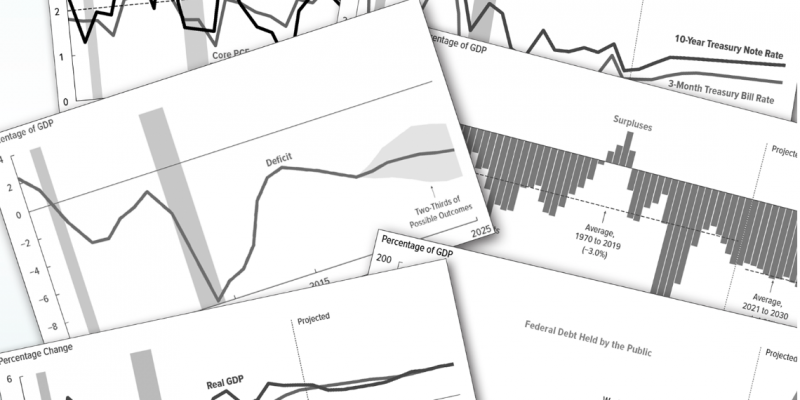 The latest Congressional Budget Office (CBO) report projects that the federal debt will grow to 98 percent of GDP by 2030, with the economy expanding at an average annual rate of 1.7 percent from 2021 to 2030.

If no changes are made and spending and borrowing continue along the same path, CBO projects federal debt held by the public will reach 180 percent of GDP in 2050, “well above the highest level ever recorded in the United States.”

The nonpartisan agency regularly publishes reports covering projections about the federal deficits, debt, revenues, and spending, and the overall economy based on current laws governing taxes and spending.

“Other than a six-year period during and immediately after World War II, the deficit over the past century has not exceeded 4 percent for more than five consecutive years,” the report states. “And during the past 50 years, deficits have averaged 1.5 percent of GDP when the economy was relatively strong (as it is now).”

Michael Peterson, CEO of the Peter G. Peterson Foundation, told The Center Square, “Today’s CBO report shows ten straight years of trillion-dollar deficits. That’s a sad reflection of our nation’s poor fiscal health, and it adds insult to injury that we’re piling on all this debt in a growing economy.

“It’s important to recognize that it’s not just the large amount of deficit spending that’s a problem, it’s that we are borrowing for current consumption rather than investments,” Peterson added. “It would be one thing if we were running up deficits to fund investments in the future, but that’s not what’s happening. Investments are only a tiny fraction of the base budget and are not driving the deficit increases in this outlook.”

“That 10-year increase is the net result of changes that go in opposite directions,” it states. “Lower projected interest rates and higher estimates of wages, salaries, and proprietors’ income reduced projected deficits, but a combination of recent legislation and other changes increased them.”

Since the CBO’s long-term budget projection published in June 2019, it now projects that debt held by the public as a percentage of GDP will be 30 percent higher in 2049.

Interested in more national news? We've got you covered! See More National News
Previous Article GIRL DAD: Kobe Was the Lone Man in the House, and He Loved It
Next Article WARNING: Beware of ‘ghost tax preparers’ who can cause you to be fined, arrested