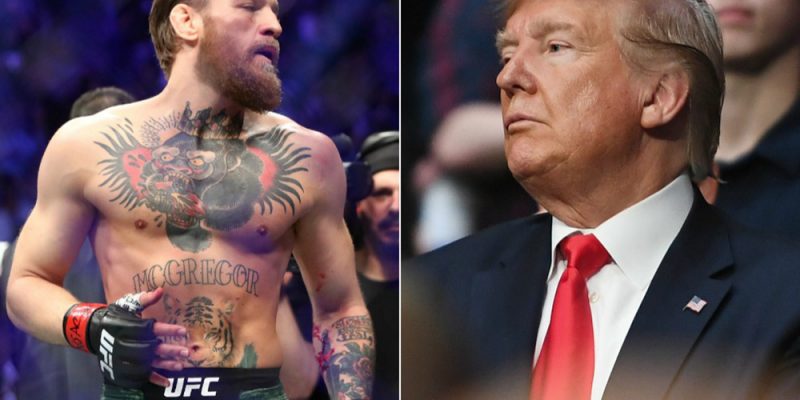 UFC Superstar Conor McGregor may have picked up some new fans (and enemies) after making a rare political statement in a tweet this week, one praising President Donald Trump.

Phenomenal President. Quite possibly the USA 🐐. Most certainly one of them anyway, as he sits atop the shoulders of many amazing giants that came before him. No easy feet.
Early stages of term also.
Incredible.
Congrats and Happy Martin Luther King Jr. day America 🇺🇸❤️🇮🇪

To clarify, when McGregor says “possibly America’s [goat emoji]” he is referring to the acronym “G.O.A.T.” or “Greatest Of All Time”.

It was quite the endorsement from one of the most well-known athletes in the world so President Trump wasted no time retweeting the post and congratulating the Irishman on his victory,

President Trump made history in November, received mostly warmly by fans as he became the first President to attend a UFC event at UFC 244 at Madison Square Garden when Jorge Masvidal defeated Nate Diaz.

UFC President Dana White told reporters what it meant to the sport of MMA,

“He’s been the most stand-up guy since the day I met him… As fans of the sport, I think all of us can sort of appreciate, whatever political side you sit on, that the President of the United States came to one of our events.”

Masvidal and McGregor are considered a likely match-up in the near future as Conor sets his sights on the 170 pound welterweight world champion title belt.

Interested in more national news? We've got you covered! See More National News
Previous Article State Action On The Impeachment Mess Has Begun
Next Article President Trump Will Be The First President To Speak At The March For Life In Person