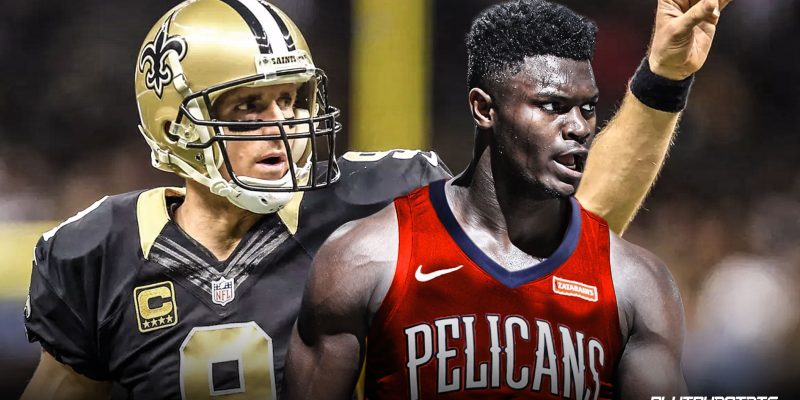 It was back in August, months before the NBA regular season was to begin, and the New Orleans Saints were in the middle of training camp.

And already New Orleans hero Drew Brees was passing a torch of sorts to a new Goliath just arrived on the scene.

His name, Zion Williamson, the No. 1 pick in the 2019 NBA draft. His potential, to be the face of the city of New Orleans, as Brees enters the twilight of his career.

There are clearly parallels between Brees’ arrival in 2006 and Zion’s arrival in 2019. The Saints were hungry for a fresh start after Hurricane Katrina, looking for that championship edge that had so long eluded the franchise. Brees, as the franchise’s new quarterback, under newly hired head coach Sean Payton no less, was immediately charged with the job of lifting the black and gold to that pinnacle. And while the Pelicans don’t have a similar single tragedy like a hurricane to mark the coming of Zion, certainly the Big Easy’s NBA franchise is seeking a similar respect and championship status among the league’s elite.

“Certainly, I am always going to be there for Zion,” Brees said. “Whatever I can do to help guide, to help advise, to help mentor, I’m there.”

He even sent Zion a very special gift, signed with the passing of the torch idea….

Drew is 40 years old. Zion is 19. While both superstars are in vastly different stages of their careers, it makes for a great story to see the elder statesman and incumbent-of-sorts doing so much to welcome and inspire a young man dying to hit the court, dying to make an impression on a city that has already fallen in love with his smile and humble attitude.

Not to mention his dynamite potential on the court.

He has missed the first 44 games this season recovering from knee surgery, but that all ends in mere hours. Zion makes his debut against the San Antonio Spurs at home, right next to Brees’ Superdome, tonight.

And it seems he is already seeing New Orleans as Drew does–for the incredible city it is.

“It’s been great man,” Williamson said. “The city is beautiful. The people are beautiful as well. They’re welcoming. I feel like they adopted me a bit. They show love everywhere I go. They tell me they can’t wait until I get out there.”

The torch is almost all yours, Zion. Your predecessor has been a community hero for a very long time and still is. He is a beloved icon of the city and the state.

But let’s hope you too can set the city on fire in your own right as time goes by, starting tonight.