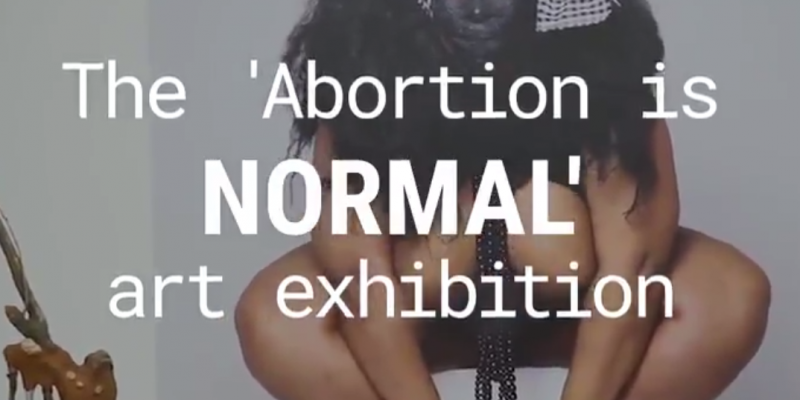 A new exhibit in New York City, called “Abortion is normal,” whose advocates claim, “any bodily procedure is normal,” appears to be advocating Satanic and pagan practices whose rituals included child sacrifice.

One of the plastic model figures in the exhibit appears to be in the likeness of the Greek Goddess Diana or her Egyptian equivalent, Isis. On her head is a golden halo, and strapped to her back, a sword. Worshippers of both have historically sacrificed children. The hand gestures on the t-shirt worn by the figure appears to be in homage to the Evil Eye of Horus, above which the words read, “thank God for abortion.” God is referring to the Satanic and pagan god Horus, who according to mythology, was magically conceived out of necrophilia.

Another figure wears what appears to be a golden crown in the shape of eagle wings, also representing Egyptian mythology. Still another, wears a sun goddess headdress, representing yet another homage to Isis.

Even the media coverage touts the exhibit as being about “reproductive rights” while ignoring the hidden messages for all to see in plain sight– the practice of child sacrifice to pagan gods.

"Reproduction rights, abortion, and any bodily procedure is normal."

This art exhibition wants to spark conversations about women’s reproductive rights in the U.S. pic.twitter.com/CnFLnEgEuf

One of the artists says that while the title of the exhibit may seem to some as provocative, women have been having abortions for millennia, she said. This is true, as people have been killing and sacrificing children for that long as well.

The polls used in the Bloomberg video reveal its bias.

The poll conducted by Marist University found that an overwhelming majority of Americans support restrictions on abortion.

Three in four Americans (75 percent) said abortion should be limited to – at most – the first three months of pregnancy. Those respondents include those who identify as Republicans (92 percent), Independents (78 percent) and a majority of Democrats (60 percent). It also includes more than six in 10 (61 percent) who identify as “pro-choice” on abortion.

The Marist Poll followed a May 2019 Gallup poll which confirmed that 53 percent of Americans oppose all or most abortions.