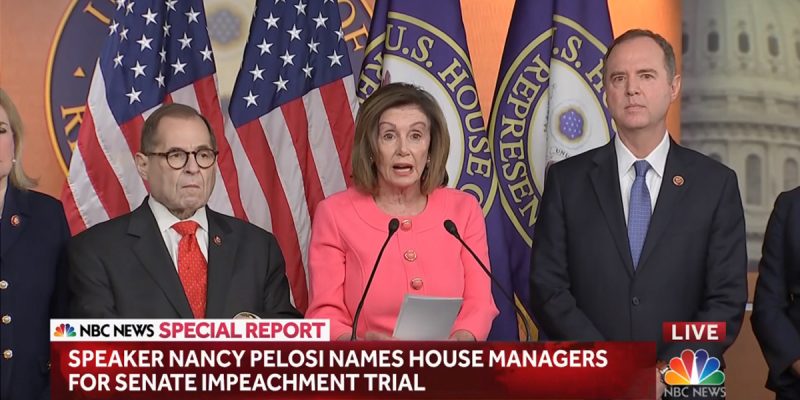 Or maybe we should call them the Seven Dwarves instead of the Mod Squad. But what we’re certainly sure about is the seven Democrats Nancy Pelosi appointed as the House impeachment managers now that she’s sent articles of impeachment over to the Senate are really, really not the best and brightest that party has to offer.

Or maybe they are, which would mean this country is in real trouble should these people ever be in control of the country again.

Speaker Nancy Pelosi on Wednesday announced the seven House Democrats who will act as the “managers” in the Senate impeachment trial of President Donald Trump.

The managers are: Reps. Adam Schiff of California, who will be the lead manager; Jerry Nadler of New York’ Hakeem Jeffries of New York; Jason Crow of Colorado; Zoe Lofgren of California; Val Demings of Florida; and Sylvia Garcia of Texas.

The managers have varied biographies: Schiff was a federal prosecutor; Demings was a police chief; several are attorneys, and Lofgren was a staffer on the House Judiciary Committee during the Nixon impeachment and a House member during the Clinton impeachment.

“This is about the Constitution of the United States and it’s important for the president to know and Putin to know that American voters — voters in America — should decide who our president is,” Pelosi said at a press conference with the managers.

She said the House would vote Wednesday afternoon to approve the managers and transmit the two articles of impeachment to the Senate. The trial is set to begin on Tuesday; it’s not yet clear if witnesses will be called.

Zoe Lofgren is a thorough and complete clown, Schiff is a proven liar, Fat Nadler is an abject failure, Hakeem Jeffries is a bribe-taker, and Demings, Garcia and Crow are nobodies.

This is the best they have to offer to the Senate?

And Pelosi is now claiming the Democrats’ Mod Squad has more evidence to offer, namely that Rudy Giuliani asked for a meeting with Ukrainian President Zelensky to “gather dirt” on Joe Biden.

Which is one way to put it. Another way to put it would be that Giuliani was looking for information from Zelensky that Biden had shaken down the Ukrainian government for bribes and then for prosecutorial passivity. And if he was able to find that information it would be more of a service to the American people in gathering evidence that would allow us to conduct political hygiene and to prosecute our own crooked politicians – of which Joe Biden is doubtless one.

Let’s hope the Senate allows the House’s Mod Squad to bring that evidence, and then let’s see if Giuliani can show up with the take from Zelensky proving, at the impeachment trial, that Joe Biden is a crook who ought to share a cell in Leavenworth with his crackhead, deadbeat son for the rest of their lives. And then let’s hope Biden and said crackhead son are dragged into the Senate chamber to testify – or rather, to refuse to do so “on the advise of counsel.”

The circus is about to begin. Please take your seats, ladies and gentlemen.