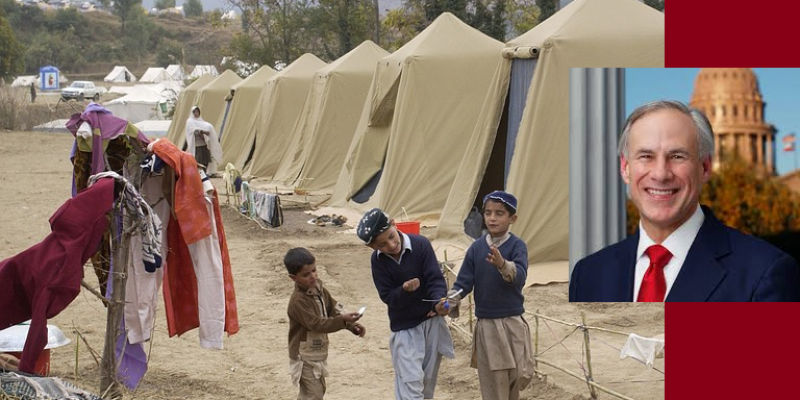 Gov. Greg Abbott took the state of Texas out of the federal Refugee Resettlement Program on Monday as President Donald Trump allowed states the power to do so in September.

This makes Texas the first state to completely refuse to opt-in (39 states have renewed their participation so far). Abbott had already withdrew Texas from direct participation in the program in 2016 due to disagreements with Obama Administration policy. Those facts did not stop critics, particularly from Mainline and liberal religious groups, from accusing the Governor of being in compassionate, “misguided” or even un-Christlike.

Abbott pointed to an existing, resource-taxing humanitarian crisis at the Texas-Mexico border in a letter to Secretary of State Mike Pompeo — a situation already under fire from similar groups of critics for not being given enough attention by state and federal authorities.

“At this time, the state and non-profit organizations have a responsibility to dedicate available resources to those who are already here, including refugees, migrants, and the homeless—indeed, all Texans,” Abbott wrote in the letter. “As a result, Texas cannot consent to initial refugee resettlement for FY2020 … Texas continues to have to deal with the consequences of an immigration system Congress has failed to fix.”

Texas, which takes in roughly 10 percent of all refugees into the United States, also helps manage about half of the 2,000-plus-mile border. Texas was hit hard during the 2019 immigration crisis involving multiple “caravans” arriving at the border and being taken to temporary camps.

Even with the crisis at the border, Texas remained the No. 1 state in the union for taking in refugees with 1,389 taken in during 2019 according to the Washington Free Beacon. By contrast, California and New York each took in 6 percent (figures may vary depending on source).

Annual admissions of refugees to the U.S. since a major 1980 refugee law was enacted have ranged from 27,100 to as many as 207,116, depending on which source consulted. In Fiscal Year 2019, Refugee and Resettlement Assistance comprised a discretionary budget of $1.905 billion according to OMB.

A large element of the program involves paying “non-profit” groups (see analysis below) to contract with the federal government to take in and care for refugees — everything from temporary housing to medical care to cash assistance. The White House has requested fewer funds for this element of the refugee resettlement in recent years — from $445 million in 2017 to $410 million in 2018.

From the hip: Many of the organizations contracted to help resettle programs are making some serious bank off the federal program. And in exchange for the funds, it’s not just refugee resettlement being offered.

According to the Capital Research Center, a libertarian/conservative D.C. think-tank, refugee resettlement is a “lucrative business” for many groups, an increasing number of which have liberal/progressive intentions.

Left-wing grant-makers have embarked on a campaign aimed at overwhelming America with unprecedented levels of immigration. These foundations underwrite a universe of liberal organizations that are devoted to bringing in ever more people from all over the world, and the organizations’ motives include money. These groups, known as “Volunteer Agencies” (VOLAGs), don’t just receive private dollars from liberal foundations; they also are richly rewarded with your tax dollars when they collaborate with federal government agencies.

These “VOLAGS” often heavily promote refugees entering the country on what is known as a “diversity visa” — now making up to half of all refugees. The center continues:

Additionally, special programs allow about 20,000 Cubans and Haitians to emigrate to the U.S. annually, with the same benefits received by refugees and asylees. There is even a “Rainbow Welcome Initiative” that funds a nonprofit contractor (Heartland Alliance International, LLC) to meet the special needs of lesbian, gay, bisexual, and transgendered (LGBT) refugees and asylees. Government funds 87 percent of the $10 million nonprofit. CEO Sid Mohn makes $330,000 per year in pay and benefits according to Heartland’s 2014 tax return. Combined, the top four officers receive about $850,000 per year—almost all on the taxpayer.

In 2015, there were around 350 federal subcontractors and nine primary contractors in 190 cities.

Because they are non-governmental organizations (NGOs), they can and do lobby for advantageous changes to immigration law and build allies in Congress and the bureaucracy, all fertilized by an open spigot of taxpayer dollars. While six of the nine contractors are affiliated with religious groups, the false notion that they are charitable organizations just doing the Lord’s work needs to be corrected. They are federal contractors, relying on the government for most, and sometimes all, of their income. This is big business. They do the government’s bidding, whether it honors religious principles or not.

Furthermore, the denominations represented all promote left-wing policies. Many reflect the “Social Gospel” i.e. the effort to marry socialist ideas with Christian doctrine begun by “Progressives” at the turn of the last century. Many are directly or indirectly connected to communists and communist ideas like so-called “liberation theology” …

The 1,389 refugee total in Texas may not seem like much for this year, but as the report noted there is a push for the U.S. to take in a steady flow of refugees from around the world, especially from countries with bloody conflicts. Case in point: In 2015, 14 U.S. Senators signed a letter urging President Barack Obama to expand the refugee program to allow 65,000 Syrian refugees into the U.S. by the end of 2016 — well-beyond the 70,000 cap. Imagine if these Senators were successful, and the U.S. (like Texas) took in the lion’s share of the approximately 3.9 million Syrians who fled around that time according to U.N. statistics.

In other words, if we were to follow the logic of left-leaning charities, that number of refugees could go much, much higher.

As with taxpayer-funded lobbying or public funds being used to fund ACORN-like leftist organizations, conservative leadership requires that the spigot be turned tightly to the right to prevent the public trust from padding wallets and bankrolling leftist causes.

Interested in more news from Texas? We've got you covered! See More Texas News
Previous Article Texas job growth this year projected at 1.6%
Next Article New California eliminates 1099 workers, saying they have to be hired as W2s, instead thousands lose income