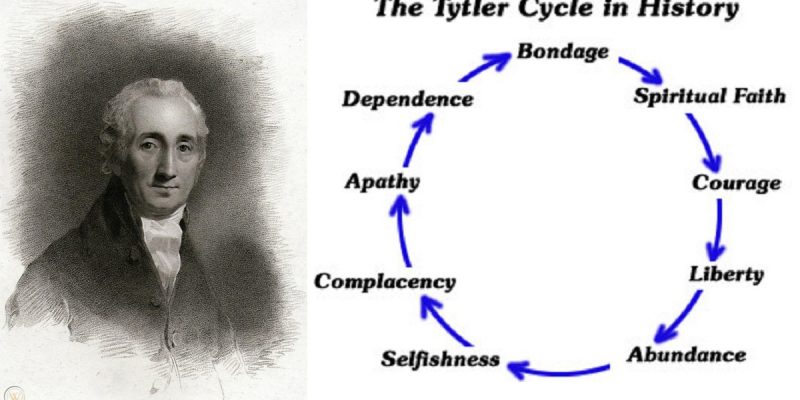 There is a famous quote attributed, though perhaps not accurately, to 18th century Scottish lawyer and historian Alexander Fraser Tytler, predicting that there is a tipping point at which all democratic forms of government become corrupted…

A democracy is always temporary in nature; it simply cannot exist as a permanent form of government. A democracy will continue to exist up until the time that voters discover that they can vote themselves generous gifts from the public treasury. From that moment on, the majority always votes for the candidates who promise the most benefits from the public treasury, with the result that every democracy will finally collapse due to loose fiscal policy, which is always followed by a dictatorship.

This quote, which there isn’t hard evidence actually originated with Tytler (it’s been mistakenly attributed to Ben Franklin and Alexander de Tocqueville as well), as well as Tytler’s other writings, has been referred to as describing the Tytler Cycle, which predicts the decline and fall of democracies. Tytler’s writings were highly critical of democracy; he believed all forms of government ultimately end in monarchy.

Has the United States reached the tipping point?

Under this definition, and based upon current poll results, we as a nation have not yet reached the tipping point. Despite that, we do see disturbing trends that would, if they continue, lead to an end of the American Dream.The main symptom of how close we are nationally to the tipping point is the success of Bernie Sanders and others in the Democratic Party. Think about this, about 45% of Democrats are openly supporting a socialist candidate for President. But blended into the whole voting population, that 45% is watered down considerably. Therefore, my contention is that we are not there yet, at least on a national basis.

Perhaps on a state level, and even more so on a city level, we have in many places reached the tipping point. In California does anyone doubt that socialism is widely accepted? In Oregon, the liberal left has become so dominant that a large portion of the state wants to secede and join Idaho. And in several other northeastern and western coastal states, left-wing extreme voter sentiment and, in some cases, massive government overspending, is leading toward the same. Illinois, whose policies have been mainly driven by tipping point voters in Chicago and other cities, is in fiscal crisis and citizens are presented with overwhelming demands for taxes. All these are manifestations of the tipping point.

Beyond the states, many cities are the best (or should I say the worst) examples of the reality of the tipping point. Detroit and Baltimore come to mind as examples, perhaps even New Orleans and Baton Rouge are approaching or have achieved this onerous distinction. Whether it was caused by economic or racial flight it really doesn’t matter. The simple fact is that the elected who govern these cities are now universally of the same political philosophy (liberal Democratic or even socialist) and they represent masses of folks who are in some way government dependent or who believe in big government dependency and don’t want to give it up in order to move to more self-reliance and personal freedom.

MacAoidh here at The Hayride has written about this in a slightly different context. He calls it weaponized governmental failure.

I suppose that this is democracy in action, but the effects are tragic. The voters elect politicians who promise to protect them as adherents of big government with more regulation and higher taxes on businesses and on people who have better incomes. As they do, the cities and states become less attractive to business and the jobs that business creates. The less business-created jobs, the less wealth creation and the more demand for government dependency. This is the tipping point into the Tytler Cycle, or really the death spiral, that swallowed Detroit and Baltimore and threatens to swallow so many other cities and states.

And now in Louisiana a new version of the tipping point, as the governor has created yet another task force, this one to find ways to save rural Louisiana from continuing economic malaise. This is folly, but predictable folly. The governor is a politician who hasn’t seen a government program or expense he doesn’t like, and once again he is ignoring the reality that the same negative effects of the tipping point affect all size communities, not just large ones. Towns exist only if they have an economically valid reason to exist, not because they just always have existed. No economy, no town. But it is far easier to deceive the people into thinking that this time it might work by creating a task force, than to address the fundamental problems that plague all of Louisiana.

In the case of our rural towns, as business departed so did the people and with them the tax base. Soon the costs to operate the town, pay debt, and maintain the infrastructure overcame the ability of those remaining to pay the taxes. And as infrastructure continues to crumble and taxes increase, no task force in the world will reverse the out-migration of business and citizens. Based on its political nature this new task force will probably recommend massive infusions of resources, but by neglecting the fundamentals, that outcome will only be good money after bad.

On a larger scale we see the same structural problems killing some of our bigger cities and our state. In response to citizen demand for government services and all the free stuff that is happily bequeathed by politicians, there is less and less to go toward infrastructure and other basic needs. The result is crumbling infrastructure, a terrible business climate, and an out-migration of citizens. The tipping point spiral is a vicious thing and it never ends well.

Based upon the current national poll numbers Bernie Sanders and the socialist Democrats have a long way to go before we would reach the tipping point nationally. However, the tipping point at the state and city level is a real time threat to our country and our beloved freedoms.

Driven by a never-ending line of politicians who are willing to use fear and jealousy to guarantee their own power, the people are being led to believe that there is a better political and economic system than the one that has made America the greatest success story in the history of mankind.

These misguided leaders rely on promises based upon never ending free stuff. And unfortunately, there are plenty of voters who are willing to believe this fairy tale, perhaps as many as who believe that there is a goose that lays golden eggs.