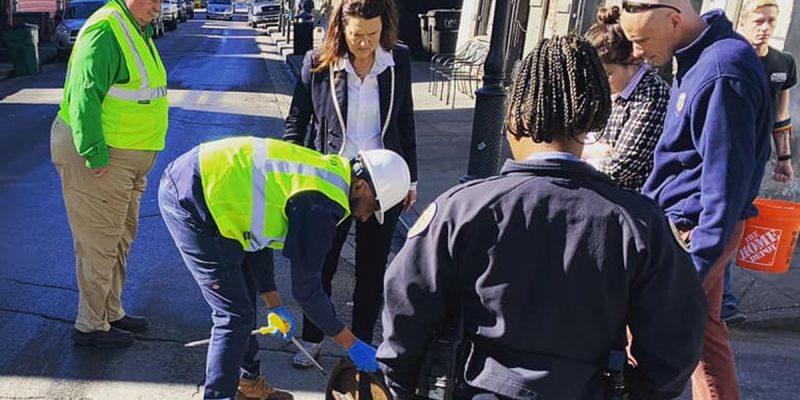 Kristin Palmer, a Democrat on the New Orleans City Council (they’re all Democrats in New Orleans, with a rare exception once in a while), put out a Facebook message on Monday which was absolutely perfect in highlighting why so many cities are total and complete failures from a governance standpoint. Here was what she said which so perfectly illustrated the problem…

The city of New Orleans, and particularly its Department of Public Works, which doesn’t have a particularly good reputation for efficiency or honest function, has a budget to clean drains.

But does the Department of Public Works clean the drains it has the budget to clean? Of course not. Those drains will go 15 years without being cleaned. Or maybe more than that.

You really don’t want to not clean the drains in the French Quarter., The tax revenue generated there from the tourist economy, which since New Orleans has run all the commerce, energy and manufacturing straight out of the city with lousy public policy, an outrageous tax and regulatory climate, crime, bad schools and Third World corruption, is what keeps that failing city’s budget afloat. Having the French Quarter get flooded because the drains are all clogged up is a bad thing, and an unnecessary bad thing at that.

And yet they don’t clean the drains in the French Quarter. They don’t clean the drains pretty much anywhere in Orleans Parish. When they do finally get around to cleaning one of them, they find Mardi Gras beads from two decades earlier. Hell, they found a car in a culvert in mid-city which washed in during Hurricane Katrina. The billions of dollars in federal money spent to take care of problems like that? It wasn’t spent on what it was appropriated for; it was wasted and stolen.

Bear in mind, there are stupid amounts of money being talked about for projects like drainage in New Orleans. And when we say stupid, we’re not kidding. Almost a billion dollars in federal infrastructure money. Naturally, the city’s mayor LaToya Cantrell says she has to raise taxes too, in order to leverage it.

So when Kristin Palmer goes to the French Quarter to watch the city finally clean a drain there, what does she see? A ton of plastic that had fallen into the drain. And Kristin Palmer’s first thought isn’t “Hey, we need to make sure these drains get cleaned more often, and why isn’t the taxpayers’ money allocated to that not being spent doing it?”

No, of course not. What’s her first thought?

Ban plastic straws and make people use the crappy biodegradable paper straws that biodegrade so fast they fall apart by the time you finish your drink.

In other words, the mentality is that you exist to make the government’s life easier, rather than the other way around. Crappy biodegradable straws help protect them when they steal the drain-cleaning money, so it doesn’t matter if a biodegradable straw sucks to use. And if there are 20-year-old Mardi Gras beads in the drains, well, that just means they need to regulate how many Mardi Gras beads can be thrown off a float. If your Mardi Gras experience is biodegraded, that’s your problem.

Forget about the fact Mardi Gras makes oodles of millions of dollars for the city every year. Kill that golden goose, because what’s really important is nobody bothers the crooks and creeps in the city’s bureaucracy about doing their job. Especially when they really see their job as stealing your money.

The fact that Kristin Palmer, who by all indications is a really nice lady, would even waste time flapping her gums about biodegradable straws rather than to demand every one of those drains in the French Quarter get cleaned at least once a year, which if they were cleaned would prevent the potential for the Quarter to flood, says everything.

We’d say you’ve got to get rid of her at the next election if you want to make anything better in New Orleans, but that’s not realistic. Nobody who actually sees the problem for what it is will run against her, and they couldn’t win even if they did. Why? Because all the voters who get it wouldn’t live in Orleans Parish to save their lives.

And that’s why New Orleans is doomed. Simple as that.

Interested in more news from Louisiana? We've got you covered! See More Louisiana News
Previous Article EXCITING CHALLENGES: LSU Has Scheduled a Decade’s Worth of Power Matchups
Next Article New Orleans has liabilities equaling $18,800 per taxpayer, 5th worst in U.S. among major cities