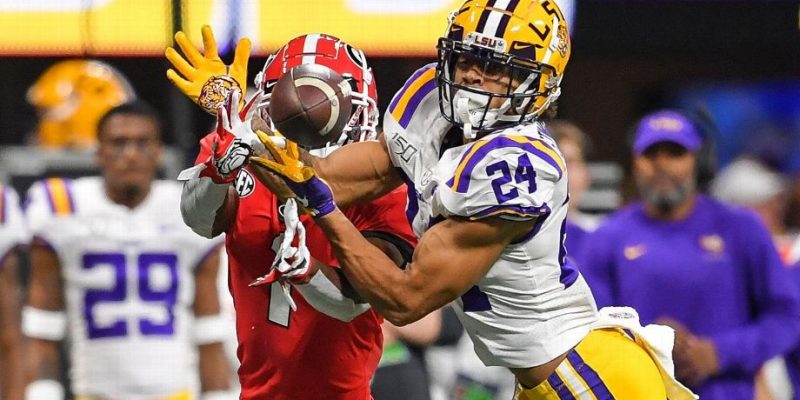 There is an assortment of services that compute team recruiting rankings, and of course ESPN is one of them.

ESPN, however, has done something that reveals exactly where those players and teams fall now, one year later. Pro Football Focus has unveiled its wins above average metric in recent weeks (PFF WAA), and ESPN used it to revisit and re-rank the top-10 classes of the 2019 cycle.

The same team that finished ahead of every one in the national championship race this past season.

The LSU Tigers just inked the No. 2 cornerback in the country, Elias Ricks, in the 2020 class, but he will have to work to crack the starting lineup. The All-American play of freshman Derek Stingley last season is obvious (more on him in a second), but what many LSU fans may not realize is that a second true freshman cornerback shined as well, albeit in more limited action. Cordale Flott, who allowed only eight of 25 targets to be caught and tallied five pass breakups, will challenge for the spot vacated by senior Kristian Fulton.

If Ricks comes in as advertised, someone will have to cover the slot receiver on the inside. And to think that LSU’s talent would overflow so much that a true outside, lockdown corner would have to “settle” for inside coverage would be truly scary for LSU’s opponents.

Now to Stingley, who may very well be the best cornerback LSU has ever fielded now after just one season, and that is saying something, considering the Tigers boast such high NFL draft picks as Patrick Peterson, Tre’Davious White, and Mo Claibourne. According to the numbers, Stingley was the second most valuable player on the team, behind Heisman winner Joe Burrow, and graded out as the most valuable non-quarterback in the entire country.

Moreover, he was the most valuable non-quarterback ever in the seven years PFF has released the WAA.

Here is an example of what the numbers do:

The stingy freshman forced tight coverage on 75.5% of his targets, more than 25 points higher than the national average. On those specific plays, Stingley allowed just 20 receptions on 71 total targets. He also intercepted six passes.

He is the absolute epitome of a shutdown corner.

With half the field covered, with other star cornerbacks battling for the other positions, and with new defensive coordinator Bo Pelini bringing in a more attacking style to that side of the ball, the 2020 Tiger defense shouldn’t just be good.

They should be scary, scary good.

Interested in more news from Louisiana? We've got you covered! See More Louisiana News
Previous Article If You Thought You Were Getting A Responsible Second Term From JBE, Well…
Next Article SADOW: Conservative Execution Critics Seem A Bit Delusional