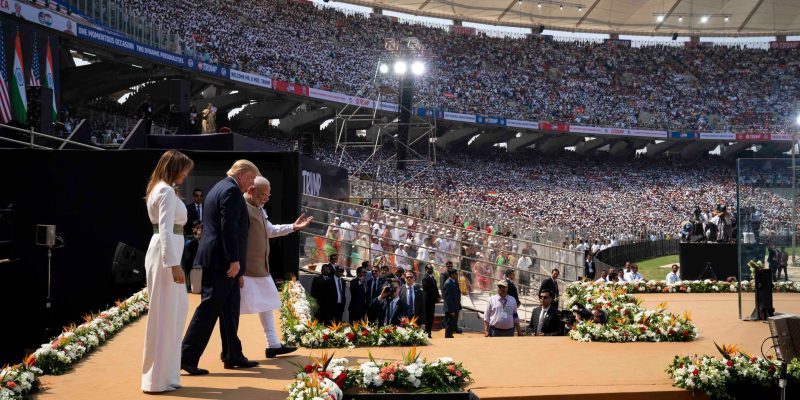 President Trump is no stranger to large crowds, regularly drawing tens of thousands to his “MAGA” rallies but today an even bigger rally was held for the US President in Ahmenabad, India.

Indian Prime Minister Modi met the President and First Lady on the tarmac, welcoming them to the world’s largest democracy and its fifth largest economy.

From the moment Air Force One touched down, President Trump received a welcome fit for royalty which included a red carpet, military salute, music, dancing, and a camel caravan.

Billboards featuring the two leaders’ appeared around the city, one such image reads, “Two dynamic personalities, one momentous occasion.”

India showered the US President with praise, hosting a “Namaste Trump” rally with over 110,000 Indians packed into the the world’s second largest stadium to see the forty-fifth President in person.

President Trump and Prime Minister Modi took the stage to a roaring crowd, lifting each other’s hands in the air before joining the crowd in singing both Countries’ national anthems.

The President announced the imminent signing of a new military trade agreement to include over $3 billion in US helicopters and other equipment, adding that progress is being made with Pakistan to curb terrorist activity in India adding,

“The United States and India are also firmly united in our iron-clad resolve to defend our citizens from the threat of radical Islamic terrorism.”

The US President predicted a thriving future for the developing Nation declaring,

“India will soon be the home of the biggest middle class anywhere in the world. And within less than 10 years, extreme poverty in your country is projected to completely disappear. The potential for India is absolutely incredible.”

According to Pew Research, President Trump is actually more popular in India than he is in the United States with a 2019 poll finding his support at an impressive 56%.

It is safe to say that the diplomatic trip represents one of the closest alliances and friendships that the President has been able to foster.

See the historic event for yourself below: