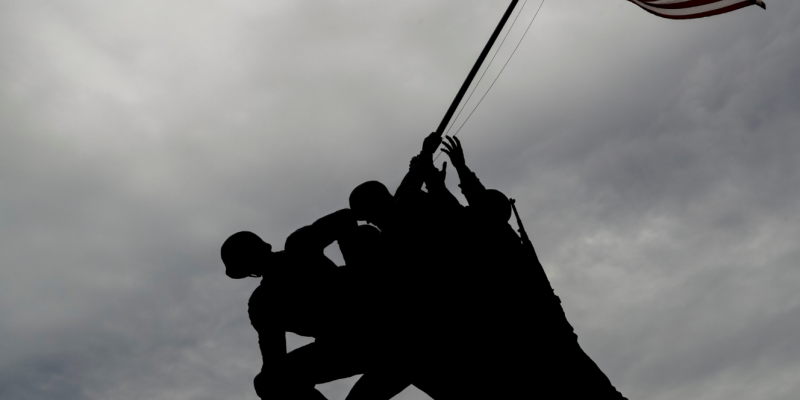 The iconic image of the flag being raised during the World War II Battle of Iwo Jima took place 75 years ago on February 23, 1945– just four days after the battle began. In the first 35 days 7,000 Americans were killed by the Japanese.

One-third of all U.S. Marines killed in World War II died on the island of Iwo Jima, Japan.

The raising of the U.S. flag over Mount Suribachi, was the first foreign flag to ever fly on Japanese soil. AP photographer Joe Rosenthal took the photograph. It became the iconic image for the battle and the War in the Pacific. It is one of the most reproduced photographs in the world.

Some 70,000 U.S. Marines landed on Iwo Jima and were outnumbered by Japanese forces by more than three-to-one. Estimates suggest more than 18,000 were wounded and nearly 7,000 were killed.

“In the long record of American heroism in combat, few episodes capture the indomitable will and the stouthearted spirit of the American warrior better than the triumphs on the island of Iwo Jima in early 1945,” the White House said in a statement. “Seventy-five years later, we pay tribute to the immeasurable sacrifice of those killed in action on Iwo Jima, and we honor the heroic efforts of all who took part in one of the most costly and significant battles in our country’s history.

All told, 27 Medals of Honor—the highest honor given to members of the military—were awarded for actions of conspicuous gallantry during the battle. Of them, 22 were given to Marines.

Among the Iwo Jima heroes were non-combatants, like Rabbi Roland Gittelsohn, who several days after the battle, delivered a message at the Fifth Marine Division cemetery on Iwo Jima. He said, “Here lie officers and privates, blacks and whites, rich and poor together. Here are Protestants, Catholics, and Jews together. Here no man prefers another because of his color.”

Seventy-five years ago today during the Battle of #IwoJima75, Marines claimed Mount Suribachi and raised the American flag at its summit, creating an unforgettable and iconic moment in American history and patriotism. #WeAreIwo. pic.twitter.com/6oNg5MEPhP