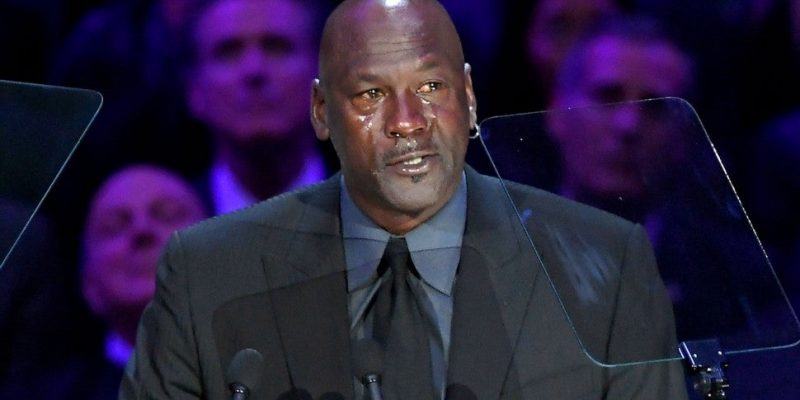 The tears came as soon as he stepped onto the podium in front of the thousands in attendance at the Staples Center in Los Angeles today.

And fortunately for anyone watching, they didn’t stop.

Every Laker fan was a Michael Jordan fan for the next ten minutes, a moment in time that dripped with emotion and an authentic sense of loss and love.

Making a rare public appearance for the late Kobe Bryant’s memorial service, perhaps the greatest to ever play the game of basketball couldn’t contain the overflow of sadness as he paid tribute to his friend, his “little brother.”

He even made a point to make a well-timed quip about “another crying meme,” a levity-inducing joke that was as perfect as one of his patented fadeaway jumpers.

“Now he’s got me—I’ll have to look at another crying meme for the next…” Jordan said, with tears streaming down his face, before getting relieved from finishing the sentence by a chorus of laughs and applause. “I told my wife I wasn’t going to do this because I didn’t want to see this for the next three or four years. That is what Kobe Bryant does to me.”

While the laughter was welcomed and occurred at several moments throughout the speech, the soul of it was nothing short of spectacular, a moving symphony of words and emotion that might have made you remember how much you miss the passion of Michael Jordan the basketball player.

“This kid had passion like you would never know,” said Jordan. “It’s an amazing thing about passion. If you love something, if you have a strong passion for something, you will go to the extreme to try to understand, or try to get it.

In a legendary speech rife with moving soundbyte after soundbyte, Jordan ended his time with a plea to everyone.

“No one knows how much time we have,” he said. “That’s why we must live in the moment, we must enjoy the moment. We must reach and see and spend as much time as we can with our families and friends and the people that we absolutely love. To live in the moment means to enjoy each and everyone that we come into contact with. When Kobe Bryant died, a piece of me died. And as I look in this arena and across the globe, a piece of you died, or else you wouldn’t be here. Those are the memories that we have to live with and learn from. I promise you that from this day forward, I will live with the memories of knowing that I had a little brother and I tried to help him everywhere I could.

It was the final words he spoke as he walked off the stage to the sound of a raucous standing ovation, in a moment of gravity that surpassed twice over any thrilling moment he ever gave us on the basketball court.