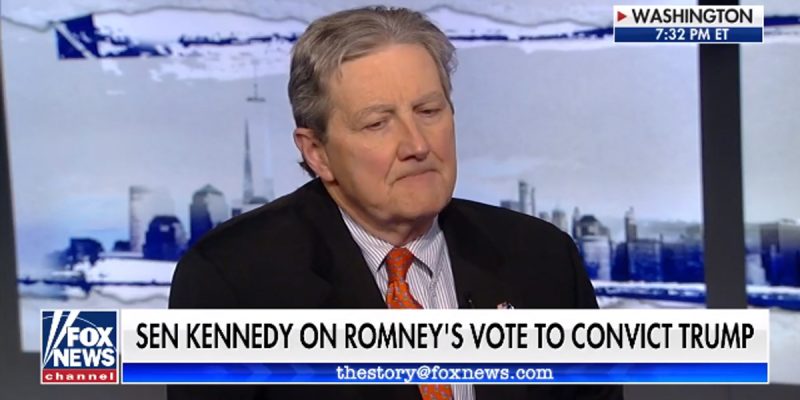 Here’s an interesting five minutes of video. It’s Louisiana’s junior senator John Kennedy, on with Martha McCallum on Fox News last night, and Kennedy is sounding off about impeachment, the hostility shown by House Speaker Nancy Pelosi and the rather shocking decision by Kennedy’s colleague, Utah Senator Mitt Romney, to go down in history as the only Republican to vote to convict President Trump.

Romney’s decision has roiled Republicans quite a bit in the last day, particularly given that in Washington it’s fairly well known that what motivated Romney was personal animus and jealousy of the president – who, let’s face it, was able to do in 2016 what Romney could not in 2012.

Kennedy wouldn’t speak to Romney’s motivations but it’s fairly unmistakable that he saw straight through Romney’s vote. Senators aren’t supposed to call each other out publicly and he stopped short of doing so, but when Kennedy said “that’s between Mitt and his people back home” in Utah, it wasn’t hard to figure out what he was talking about – given that there is a recall effort getting started in Utah to remove Romney.

On Pelosi, Kennedy was a lot less circumspect. He has zero use for her and doesn’t mind letting us know about that. Kennedy’s characterization of the impeachment vote as a naked political referendum on the president, which is accurate seeing as though there were no real crimes Trump was charged with and several wavering Democrats like Joe Manchin and Doug Jones who had openly expressed doubts about Trump’s guilt and the process itself but who voted to convict solely along party lines. Kennedy said in America we don’t settle political disagreements with impeachments, we do it with elections. That’s a solidly majoritarian position and one which you’ll likely hear over and over as the political fallout from Pelosi’s folly spreads.

And Kennedy also weighed in on the State of the Union speech, praising Trump for its new ideas and celebrations of American heroes. He did say if he’d been giving the speech he’d have shaken Pelosi’s hand, but otherwise Kennedy was firmly on Trump’s side of that argument.

And here’s a link in case it won’t load.