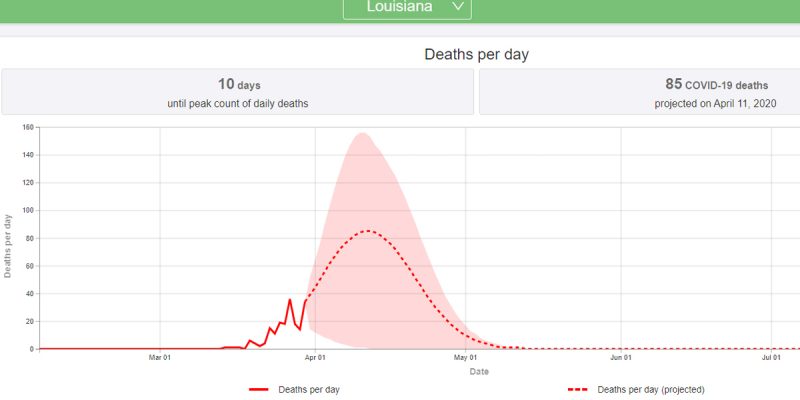 We’re not particularly big fans of data modeling where the Wuhan virus is concerned, because data models operate on a Garbage In, Garbage Out template all too often. We’ve seen that with all the climate change models which have been consistently wrong and nearly unanimously agenda-driven, and the data model which influenced public policymaking in the U.S. and other countries, the one from Imperial College London which predicted 2.2 million dead from the virus here and a half-million dead in Great Britain, fell apart almost as soon as it was released. The mathematician responsible for that model last week pulled an Emily Litella and gave the world a “Never Mind,” revising his estimate of deaths in Great Britain from 500,000 down to less than 20,000.

So take this data model with a grain of salt when it predicts Louisiana will hit its peak infection from the Wuhan virus on April 10, which is Good Friday.

What this means is, don’t make plans to need an operation for the next three or four weeks in Louisiana, because you aren’t likely getting one. If this model is correct, the virus patients will be filling the hospital beds up for at least the next four weeks as this thing hits the top of its curve.

This model is a product of the University of Washington’s Institute for Health Metrics,

As you can see, the graph at the top suggests Louisiana will top out at 85 deaths per day on April 11, the day before Easter, which is a spike from the 34 deaths the state suffered yesterday. The model predicts the last virus death of the current outbreak will come on May 12, at which time the death toll in Louisiana will stand at 1,978.

Hurricane Katrina’s official death toll in Louisiana was 1,577, so this would be worse if those numbers pan out. For frame of reference, though, in 2017 31 people per day in Louisiana died of heart disease, and 26 people per day died of cancer in the state that year. In 2017 785 Louisianans died of the flu or pneumonia, which would mean this would essentially be a tripling of a normal flu season in the state.

As of yesterday’s update, the virus has claimed 185 lives in Louisiana out of 4,025 cases reported. There have been over 34,000 tests for the Wuhan virus completed in Louisiana nearly 31,000 of those by commercial labs. Some 1,158 people have been hospitalized with the virus, 385 of whom have had to be placed on ventilators, though some of those numbers have been privately called into question by lawmakers and other public officials. Louisiana Gov. John Bel Edwards has predicted New Orleans will run out of ICU beds by the first week of April, but according to this model the state exceeded its capacity six days ago.

Perhaps some of that has to do with the state ramping up its efforts to deal with the virus. Edwards said yesterday he’s going to extend Louisiana’s stay-at-home order beyond April 13 to April 30 as a result of the outbreak.

So far, there are 164,000 reported virus cases in America, with the death toll currently standing at 3,178 – a death rate of 1.9 percent. Louisiana’s death rate, as of yesterday’s numbers, stands at 4.6 percent, which seems to be a substantial statistical anomaly. That has given rise to questions about how those numbers are tabulated, though statistics from the Louisiana Department of Health indicate bad luck and an unhealthy population appear to be factors…

The Louisiana Department of Health released new statistics about the underlying conditions among COVID-19 deaths as of March 29:

Interested in more news from Louisiana? We've got you covered! See More Louisiana News
Previous Article SADOW: Nothing Legal Will Happen To The Life Tabernacle Church Congregants
Next Article APPEL: JBE Needs To Remember That Federal Funds Come And Go