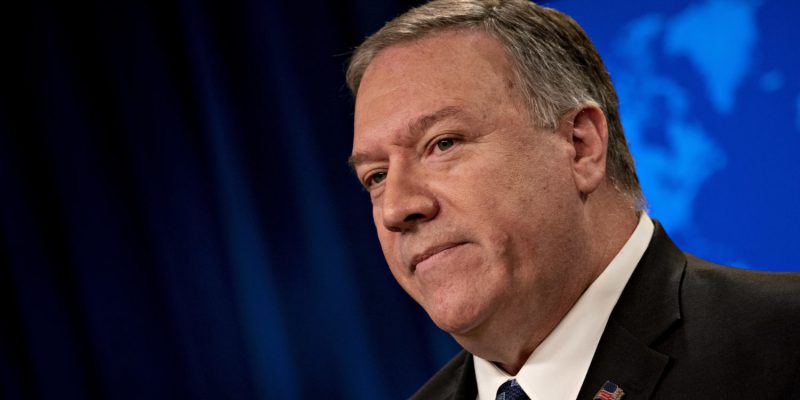 In a recent interview with Fox News, President Donald Trump said that he wouldn’t use the phrase “Chinese virus” anymore. His reasoning was clearly not because of race or because he agrees that he had been using stigmatizing language before, something he’d been criticized for (shocking).

“Everyone knows it came out of China, but I decided we shouldn’t make any more of a big deal out of it,” Trump said.

Trump’s top diplomat isn’t being so, well, diplomatic. In remarks he made after the G7 foreign ministers’ meeting yesterday, Secretary of State Mike Pompeo continued his crusade against Chinese leaders’ “disinformation campaign,” as he called it.

“The Chinese Communist Party poses a substantial threat to our health and way of life, as the Wuhan virus clearly has demonstrated,” Pompeo said, thundering down on Beijing for putting up the front of providing assistance to other countries, then “claiming that they are now the white hat” on the world front.

Pompeo’s determination with the virus’ phrasing may have caused a small divide in the G7 alliance, which did not agree with Pompeo’s insistence that the term “Wuhan virus” be used.

Regardless of what it is called, as the pandemic continues to take lives, to put the world on hold, and to impact economies around the world, communist officials in China persist in gaslighting the world by falsely accusing the United States military of starting this worldwide catastrophe. The “white hat” Pompeo is referring to is China’s attempt to save face and play the hero by delivering medical supplies to virus-ravaged countries.

The goods China has been delivering, however, are reportedly beyond faulty. In the Czech Republic, the Chinese Communist Party dropped off hundreds of thousands of Wuhan coronavirus tests–and a shocking 80 percent of them gave inaccurate results. Moreover, despite using words like “supplied” and “delivered,” insinuating a gift or donation, China actually charged the Czech government millions of crowns.

Amidst all of this, the Chinese government continues to push propaganda that this is the United States’ fault.

Pompeo is doing what at least a part of Trump likely would love to do. When Chinese Foreign Ministry spokesperson Zhao Lijian ignited those conspiracy theories on Twitter, the State Department blasted the ambassador in Washington.

“This is crazy talk,” Pompeo said on Wednesday, calling the drummed-up conspiracy disinformation spread in order to “deflect on what has really taken place here.”

This story goes beyond the current whirlwind of words, of course. And Republican lawmakers Elise Stefanik and Josh Hawley have introduced a resolution to investigate, with international assistance, the devious dealings of the Chinese government.

“Since day one, the Chinese Communist Party intentionally lied to the world about the origin of this pandemic,” Senator Hawley said in a release. The CCP was aware of the reality of the virus as early as December but ordered laboratories to destroy samples and forced doctors to keep silent. It is time for an international investigation into the role their cover-up played in the spread of this devastating pandemic. The CCP must be held to account for what the world is now suffering.”