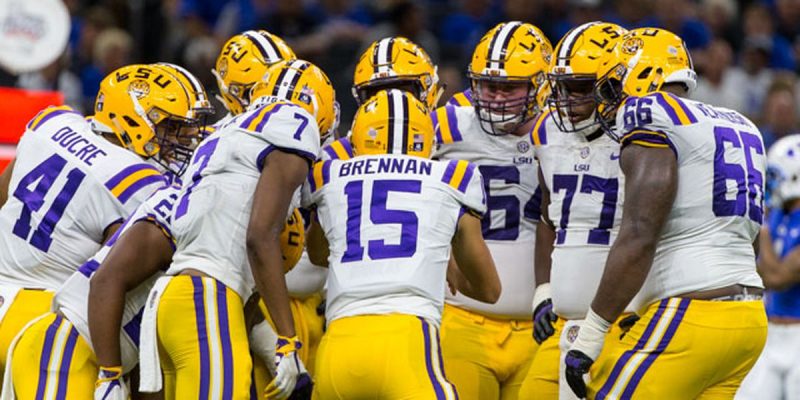 As LSU quarterback Myles Brennan celebrated in the locker room after the Tigers’ national championship win over Clemson two months ago, it was of course Heisman winner Joe Burrow receiving all the attention from news reporters.

That tends to happen after you cap off a magical season with a 463-yard, five-touchdown beatdown of the No. 2 ranked defense in the country.

Meanwhile Brennan, who has waited patiently for two years for his shot, and long thought to be the “air” apparent upon Burrow’s flight to the NFL, did have this to say to 247Sports:

Fast-forward two months and LSU’s spring practice was underway. It appeared as though Brennan was right on schedule to step into that starting quarterback role. With redshirt freshman Peter Parrish suspended indefinitely, and only two true freshmen on campus to challenge him, Brennan’s play exuded precision and confidence.

His talk off the field also showed a realization that nothing is being given to him yet.

“It’s been a very long process,” he said. “There’s a lot of work to be done obviously. As Coach O says, the depth chart is etched in sand. Meaning, he hasn’t named a starter yet. Just because Joe has left, I feel like it’s my turn, but I still have to go out and earn this job, and I have to prove to myself that I’m capable of being the starting quarterback for LSU, and being a successful quarterback.”

“Myles Brennan has been excellent the past couple days. He was good on Saturday and even better today,” head coach Ed Orgeron said last Tuesday. “Today there was more completions. Saturday was more drops with the receivers. I think his ball was on the money. I think he adjusted his long balls today. I bet he completed 12 or 14 today.

All of that was before the coronavirus shut LSU and everything else down.

Spring practice and the spring game have been cancelled.

Now Myles Brennan is having to play the waiting game yet again.

Certainly Brennan cannot lose the starting job to either of the two freshmen while none of the three is able to practice. He is the clear-cut starter. But it has to be frustrating for a young man, so eager to simply take all the reps with the first team offense, to have wait even longer now to prove his mettle for a team looking for a new unquestioned leader–not just a new quarterback–to emerge.

He’ll have to prove his worth behind the scenes in the coming months, through film study and shell sessions, maybe even through the everyday leadership opportunities of being a high profile athlete living during the world-wide crisis we are now experiencing. If Brennan continues to be patient and work hard at the intangible qualities that go along with being a leader on the actual football field, there’s no reason why this time away, this time of waiting yet again, can’t forge in him the character and perseverance necessary to take the Tigers to the top once more.