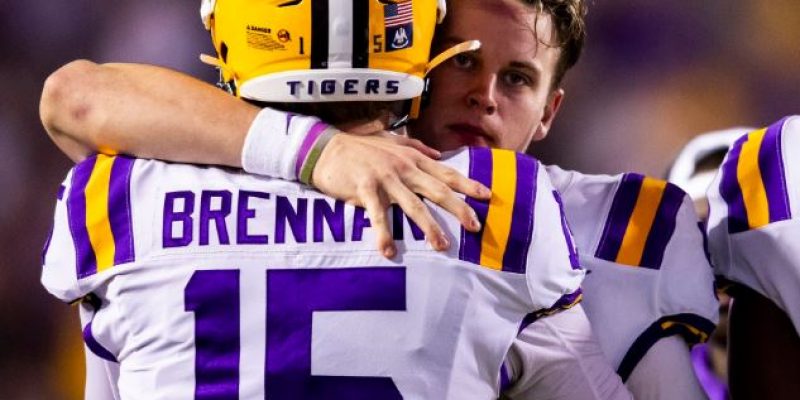 Myles Brennan, a rising redshirt junior, is a rare commodity these days.

In this world of immediate gratification, college football stands out as one of its most visible symbols. Blue-chip prospects want playing or starting time right away, and oftentimes if they don’t get it, the year-old transfer portal is the immediate option they seek.

But this is not the case with LSU’s new man in the shotgun.

“He has sat patiently, him and his family,” head coach Ed Orgeron said. “They have believed in LSU. I told them we believe in Myles. Now it’s his time.”

He was considered one of the top quarterback prospects in the country coming out of high school in 2017, a consensus four-star prospect by all major sites. He was ranked the No. 4 pocket passer by ESPN, and the No. 6 pro-style quarterback in the 247 composite rankings.

Brennan came over from Mississippi to Baton Rouge three years ago as a wiry 6’4, 184 freshman. He’s added 30 pounds of muscle, largely built through 1,300-calorie breakfasts.

Replacing the legend that is Joe Burrow is probably not the most desired position you could want, even if you are poised to take over as the starting quarterback at a national championship program. Brennan has waited his turn for three years. He has been the tortoise in a sport full of hares, and it is clear that it is now his time to lead the Tiger charge.

“I don’t know if we’re going to see another guy like Joe,” said Orgeron. “We may, we may not. We want Myles to be his best. If he’s at his best, we feel that he can be excellent.”

Certainly Brennan can surpass Burrow’s first year as a starter at LSU. It can be easy to forget that before the 2019 Heisman legend came the 2018 gritty, talented quarterback that led LSU to a 10-3 finish, Fiesta Bowl victory, and final No. 6 national ranking. And he did it by finishing the season with a solid 2,894 yards passing, 16 touchdowns, and five interceptions. He tacked on 399 rushing yards and seven rushing touchdowns.

Nowhere near the astronomical 5,671/60/6 campaign he just put up. No one has to repeat that for LSU to repeat as national champions. No one will. As long as Brennan understands that, he should escape the potential shadow Tiger fans may unreasonably create.

And by balanced, I don’t mean not-explosive. This team will put up points in big numbers, rest assured. It will just look a little different. It may take seven plays instead of two or three. Think somewhere in the middle between 2011’s run-heavy offense and last season’s ridiculous video-game-like air raid.

It will look a little bit closer to human.

But human can take home the trophy. Human can keep the fun going. If LSU can summon that style of play, along with what looks to be a stingy defense developing, don’t be surprised if Brennan and the Tigers are hoisting that championship trophy again next January.

Brennan deserves anything close to that. He’s waited his turn like a champ when many would’ve been long gone.