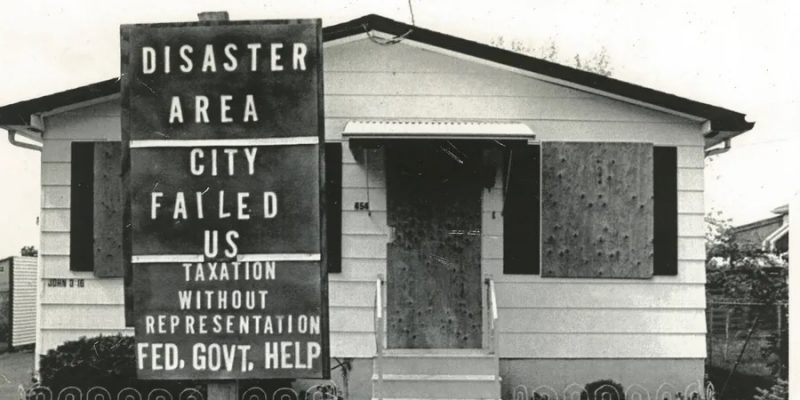 With the recent explosion at Watson Grinding and Manufacturing, residents of Houston question the safety of new residential development next to industrial properties.

While The City of Houston itself has no zoning and is allowing the developer free-for-all, that cannot be used as the scapegoat for all developments in Harris County that can lead to environmental hazards.

Case in point: the City of Bellaire an “upscale”, home-rule municipality, which prides itself as an 3.6 square miles nested inside the City of Houston, as quiet, community oriented, residential “the City of Homes” boasting strict zoning ordinances that historically was strictly enforced.

However, the current city government is pushing forwards with a proposed redevelopment of a former research facility of Chevron-Texaco. Never mind the fact that the Chevron-Texaco property has been deemed a “superfund-site” by the EPA. The United States federal Superfund law is officially known as the Comprehensive Environmental Response, Compensation, and Liability Act of 1980.

The federal Superfund program, administered by the U.S. Environmental Protection Agency is designed to investigate and clean up sites contaminated with hazardous substances. And while these properties can be cleaned up to a degree to which people can enter the property and not suffer any long term health effects.  Meaning any long term habitation of the property could lead to long term health issues.

That doesn’t seem to sway the City of Bellaire and its city manager Paul Hofmann with moving forward with a mixed use development of higher density than anywhere else in the city. Residents are concerned with the lingering environmental contamination of the property with regards to long term residential use. This contradicts the city’s own environmental studies  that contained numerous redaction in November 2018  and sugar coats the environmental concerns in July 2019

This hearkens back to memories of the what transpired at the Love Canal Development next to Niagara Falls New York. A short history of the Love Canal was a partially constructed canal that went bankrupt and the 70 acres that was dredged out was filled up as a dumping site of chemical byproducts for Occidental Chemical Corporation. After which it was covered over and developed into a neighborhood. Shortly after the Love Canal site was occupied by residents, these very residents started to develop leukemia as a direct result of the environmental contamination. The entire Love Canal Development had to be permanently evacuated and was deemed a superfund site for decades.

It seems despite past history of superfunds sites not being habitable to permanent residents, the City of Belliare and its government under Hofmann are going to be repeat the same mistakes.

This would not be the first controversial act by Mr. Hofmann as city manager which one of his first acts after being hired by the City of Bellaire was to fire almost the entire senior staff of the  public works department and to hire outside consultants to replace them. This has lead to many other controversial & questionable acts such as the attempt to replace all the city water meters with a no bid contract from Siemens under a certificate of obligation. Citizens of Bellaire put up enough resistance to this that forced a bond initiative vote.

It seems the current Bellaire Administration under Hoffmann also is hell-bent on changing the character of the city itself, which has historically been zoned low-density residential into a mix-use high density community that its longstanding residence moved to Bellaire in the first place to get away from. The City staff and Planning and Zoning Commission seems more than willing to work with these developers and grant their requests to rezone numerous Bellaire properties to build whatever they desire, not demand developments to comply with current zoning that would force the developers to keep their properties inline with the historic character of the city.

Another interesting fact to point out is that Mr. Hofmann has been granted an exemption to actually living the in city of Bellaire itself which historically been require of past city managers and other senior city staff. In fact this is Texas Law. Texas knew the score. But, some legislator sneaked in that the City Government may grant a special exception, something Bellaire never did before, citing financial hardship. They did just that. It’s kind of hard to believe considering that the city manager’s starting yearly salary was $144,000 plus perks.

A fact that becomes even more outrageous when Mr. Hofmann’s residence was spared from the floods of Hurricane Harvey which flooded much of the City of Bellaire itself to which the City’s image and property values are still recovering from, where 1,600 homes and all of the newly acquired heavy Public Works equipment and vehicles.

Historically under previous city managers and the old public works department the worst flooding the City of Belliare would have sustained was minor street flooding and no significant flooding of houses or commercial structures, which included the massive flood event of Tropical Storm Allison and Hurricane Ike. It would seem the “flood control measures” installed under Mr Hofmann’s tenure would appear to be counter productive to their intentions. It makes you wonder what Mr. Hoffmann’s track record in city administration was before being hired by the City of Bellaire.