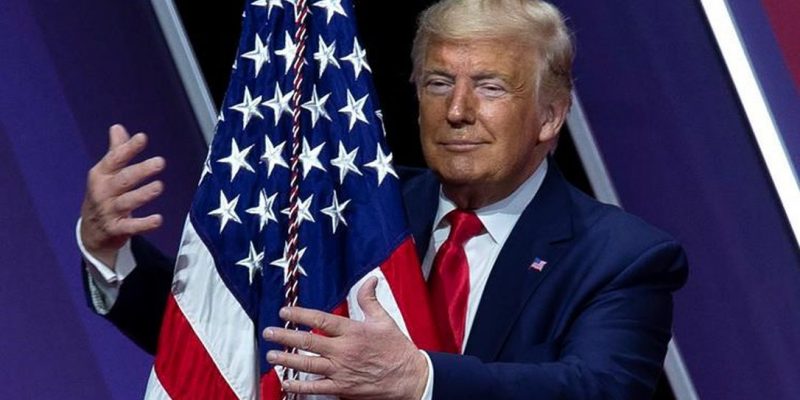 President Donald Trump addressed the crowd of nearly twenty-thousand at the 2020 Conservative Political Action Conference which has a reputation for being the largest political event of the year.

It was the perfect time for the President to get as animated as he wished with an audience that he knows agrees with him on virtually everything.

The President entered the stage to roaring applause from the huge crowd of conservatives, repeating a spectacle from last year that irked liberals, hugging the American flag before adding a kiss to his demonstration of affection for America which you can see below.

President Trump set the tone for the speech by saying,

“Together we are defeating the radical, socialist Democrats, the fake news media, the crooked politicians, and the crooked, hate-filled left-wing mob… We’re defending our faith, our values, our heritage, our borders, and our God-given freedoms.”

President Trump delivered his message of peace through strength to the crowd of Republicans declaring, “We intend to keep radical, Islamist terrorists the hell out of our country.”

The President told the powerful story of a US bomb squad that was unable to detect a roadside bomb because it was made out of plastic by the late Qassem Soleimani telling the crowd, “We took that son of a b**** out, didn’t we?”

The speech segment that received the most coverage came when President Trump imitated presidential candidate “Mini Mike” Bloomberg (D-NY), squatting behind the podium to tease the former mayor of New York for his small stature, poor debate performance, and spending $700 million already adding, “It just goes to show you that you can’t buy an election.”

See the humorous moment for yourself below:

President Trump was in full campaign mode, pulling no punches and going after many of his political adversaries, calling Mitt Romney a “low life” and saying of Democrats,