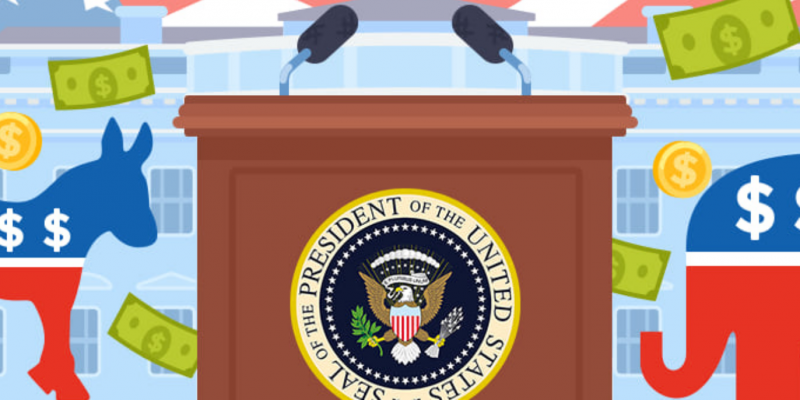 It costs an average of $358 million to run for president of the United States, according to an analysis by the personal finance site, WalletHub. The analysis is based on financial disclosures and campaign spending data from candidates in 2016 and 2020.

“Who wants to be president of the United States has turned into a game of who’s not a millionaire, who’s taking money from billionaires, which billionaire can buy love at the ballot box, and how many trillions of dollars in policy promises it takes to spark a movement,” John S Kiernan, managing editor at WalletHub wrote.

The WalletHub report analyzed seven candidates’ financial disclosure forms to “get a sense for how they’ve managed their finances in the past and perhaps how they’ll manage the country in the future.” It includes an infographic and comparisons to “how the average candidate’s savings compare to the average American’s and which candidates made a small fortune from speaking fees.”

The average assets of the seven presidential candidates, according to WalletHub, is $208.5 million compared to the median assets of Americans of $29,410.

The average cash savings of these candidates is $16 million compared to the less than $1,000 held by most Americans.

Klobuchar and Warren have listed no liabilities on their financial disclosures, the report states, meaning they have declared no debt.

Bloomberg is missing from the report because he requested and received a second extension for filing a personal financial disclosure report, WalletHub notes. Receiving the extension means Bloomberg won’t have to provide the details about his assets and income until after March 3.

All data pertaining to each candidate was sent to the candidates for verification, according to the report, to which only Klobuchar’s campaign responded.

The report was based on financial disclosures, information from the U.S. Census Bureau, the Federal Election and news reports.