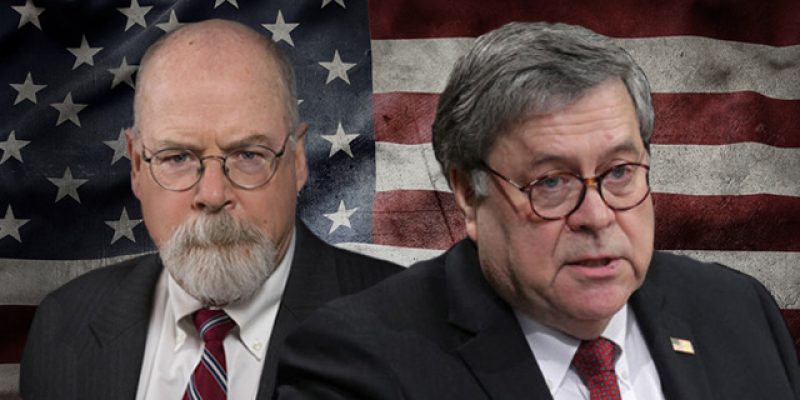 Unless you happened to be watching The Ingraham Angle on Fox News last week, you may have missed a very exciting clip of Attorney General Bill Barr speaking on Special Prosecutor John Durham’s ongoing investigation into the investigators of President Trump.

Barr’s comments come just days after the office of David Horowitz, Inspector General for the U.S. Department of Justice announced that an internal review discovered dozens of “material errors” or “material omissions” in the FBI’s warrant applications to spy on Trump’s associates.

The 85th Attorney General of the United States broke his silence on the matter as many Americans are growing impatient with the elusive conclusion of the case. Barr seemed to acknowledge that, saying the “sprawling” case which spans over several years “takes time” to build but he added that Durham is working “diligently” on the case.

The reason it is sprawling is because the origins go as far back as 2016 when the government admittedly spied on multiple Trump campaign operatives which was based on the since-disproved Steele Dossier that was paid for by national Democrats.

Barr explained that Durham’s “primary focus isn’t to prepare a report, it’s to bring to justice people who were engaged in abuses if we can prove there were criminal violations.”

Then comes his most compelling comments on the investigation when he says,

“My own view is that the evidence shows that we’re not dealing with just mistakes or sloppiness, there’s something much more troubling here. And we’re gonna get to the bottom of it. And if people broke the law, they will be prosecuted.”

The reassuring comments come as a relief to many Americans who feel that our own government facilitated the politically-driven targeting of President Trump and nearly succeeded in smearing both his campaign and his presidency as a “Russian asset”.

We previously reported that the Trump campaign is seeking damages in a civil lawsuit against the New York Times and CNN alleging that they knowingly broadcasted false information.

What also stood out in the interview is when Barr says, “I think what happened to him was one of the greatest travesties in American history.”

See the clip about the Durham investigation for yourself: