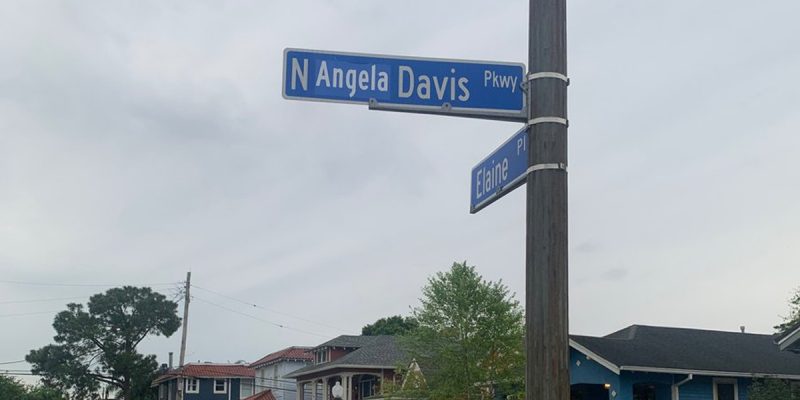 Street signs along Jefferson Davis Parkway in New Orleans were vandalized on Friday. The local fake news Advocate spun the story to inform Louisiana that street signs were “altered.” The vandals placed a sticker reading the name “Angela” over the name “Jeff” on the street sign so that the signs appeared to read “S. Angela Davis Pkwy” or “N. Angela Davis Pkwy.” The stickers have been almost entirely removed as of Monday.

The Hayride reached out to mayor LaToya Cantrell for comment, but the Chinese Wuhan alleged Bat Virus is likely all consuming.

Back on May 11, 2017, former-mayor-permanent-loser Mitch Landrieu had New Orleans Fire Department employees remove the 1911 monument to Southern leader Jefferson Davis in the middle of the night. Be clear that as history gets rewritten ever so quickly by liberal dolts posing as journalists, the removal was by no means a surprise. So many in the city opposed the monument removal movement that people within the city government leaked out Mitch’s schemes. The media was so complicit in the removals that to this day, the finances of a government operation to remove public monuments remains a mystery. The mainstream media still has never followed up with interviews with NOFD Superintendent Tim McConnell despite his presence at every removal.

Enter Doug MacCash 2020. He described the Battle of Liberty Place monument as a Confederate monument. He said the now stolen monuments were declared nuisances, though government never validated the allegation. He quoted Mitch’s wholly unsubstantiated propaganda about “the cult of the lost cause.”

MacCash makes a note of Angela Davis which includes unrevealing details such as “a proponent of leftist political causes, an outspoken civil rights leader and a feminist … She is an author and professor emerita at the University of California at Santa Cruz.” And she spoke at Xavier in 2014.

Meanwhile, her Wikipedia page reveals what comrade MacCash and The Advocate don’t want you to know: “Ideologically a Marxist, Davis was a member of the Communist Party USA until 1991, after which she joined the breakaway Committees of Correspondence for Democracy and Socialism.”

For those unaware of Angela Davis’ past, she was charged with conspiracy, kidnapping, and murder in 1970 following a fatal California courthouse kidnapping in which guns involved were registered to Angela Davis. Angela Davis was then placed on the “FBI Ten Most Wanted Fugitives.” She was apprehended and held in prison for 16 months before making bail, and she was tried and found not guilty on all charges in 1972. Davis also ran for Vice President twice under the Commie ticket in the 1980s. The Times Picayune published a column by William F. Buckley on October 20, 1988, which described Davis as “the best-known female communist in the United States.” In the same column, Buckley noted, “We must be grateful that Angela Davis’ example is not more imitated, else there would be a progressive shortage of white males.”

Re-read that last line and consider whether Angela Davis is someone who should be publicly honored. Remember that liberals today condemn all Confederate veterans, dismissing any and all of their accomplishments, to focus solely on any negative they can manipulate into their “truth.” If Angela Davis was held to the same standards Democrats grade white conservatives by, she stands no chance of a public honor. But Democrat Privilege would likely extend over to communists too now.

Back to the Jefferson Davis street signs. Radicals vandalized street names in honor of a controversial civil rights activist and a Marxist educator who hates white men. Davis was born in Birmingham, Alabama. The cry-baby Left ignorantly argued that New Orleans shouldn’t have a statue of Robert E. Lee since he was never here, although he was documented in New Orleans on multiple occasions. That same argument can be applied to Angela Davis’ impact on New Orleans since it is non-existent. She’s been here, just like Marse Robert. Jefferson Davis lived 70 miles away, had many friends in town, he died in New Orleans, and had the largest funeral in the city’s history. Jefferson Davis had strong ties to New Orleans. That’s historical fact.

The real issue that the Fake News refuses to acknowledge is that this is a blatant act of rewriting history. Someone actually made decals to rewrite street signs. Angela Davis is a public figure, a civil rights figure, and inspirational to some. Although her Commie pride has no place in a capitalist country, one should acknowledge her status as an American figure. But changing a street name qualifies as a very action that should irritate the Left because even bigger than rewriting history, this is the definition of their catch phrase “cultural appropriation.” That phrase is used to describe when members of one culture adopt elements of another culture and make it appear as their own. Cultural appropriation means these cultural elements, New Orleans’ true history, are lost or distorted when they are removed from their originating cultural contexts, and that such displays are disrespectful or even a form of desecration. But Democrats, Antifa, and the Workers Party seek to desecrate, however they certainly don’t want their perspective desecrated, only opposing views.

An example of typical liberal double standards, Wikipedia notes that cultural appropriation “can be controversial when members of a dominant culture appropriate from disadvantaged minority cultures.” That means cultural appropriation is not universal, it’s one-sided if liberals can use it as their cause. As many in the African American population in New Orleans point out, blacks are the majority in New Orleans. This is further substantiated when looking at either the dominant political party of local elected officials—all Democrat—or the racial make-up of elected officials—majority African American. So the majority or dominant culture appropriated street signs from the minority white culture.

The iconoclastic movement that began in 2015 is a case study in the shortcomings of the contemporary liberal. They obviously don’t have the fortitude, will, or discipline to engage a 15-20 year campaign raising funds to independently memorialize things they believe in. In comparison, destitute widows and orphans of the South worked for many years compiling pennies to build the memorials that the Left wants obliterated. The modern chicken-hawks seem only capable of defacing impressive things built prior or else culturally appropriating them. This can be seen in their desire to repurpose the Lee Column, the graffitied Davis base, and the vandalized Davis street signs. Instead of diversifying New Orleans’ historic landscape with new memorials, they chose to remove the cultural aspects of other cultures.

The changing of street signs shows that liberals, Democrats, and extreme leftists are severely unimaginative. They cannot find a unique way to honor their heroes, so they appropriate the works of others.

Liberals took city street signs memorializing a Southern figure for more than a century and changed the sign to make it “theirs.” The Times Picayune quoted Angela Davis herself on April 22, 1989, saying, “I don’t want to be a symbol.” Perhaps Angela Davis’ comrades should note her comment and respect her wishes. But then they’d have to appreciate history when they much prefer to rewrite it.