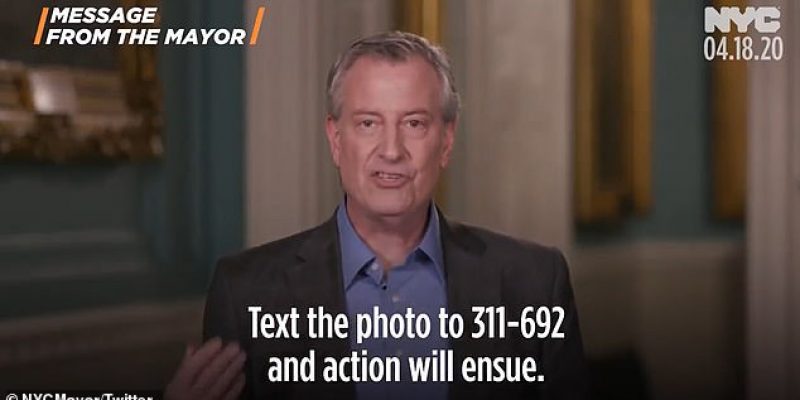 For decades Americans have sometimes used George Orwell’s dystopian novel 1984 as an illustration for the freedom-stealing dangers of big government. Any time a crisis like the coronavirus pandemic arises, many Americans will use it as a metaphor.

Well this time, thanks to Big Brother Bill de Blasio, it is no metaphor. It is as literal as it gets.

Over the weekend, the New York City mayor put out his NYC311 system to embolden residents to tattle on fellow citizens for their outlaw ways—namely, if they violate the state’s stay-at-home and social distancing rules.

That didn’t go over so well.

According to Daily Mail, the system has shut down after “members of the public vehemently criticized the ‘tyrannical overreach’ the hotline posed and within hours it was flooded with messages of contempt for de Blasio instead.”

Here is an example of one American’s viewpoint on the mayor’s “education”: 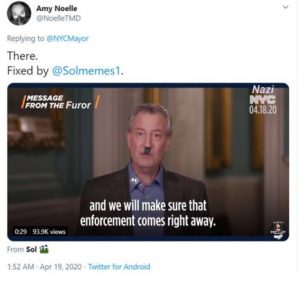 The full video by this great American can be found here.

Local government encouraging Americans to snitch on each other would have been laughed at in the literature classes I’ve taught in the past.

It is safe to say that when I teach Fahrenheit 451 or 1984 again, the themes won’t be so distant, or funny.

This is how totalitarianism begins. If you study your history, even the basic stuff they feed you in school, the loss of freedoms always starts “small.” You’re always shamed for fostering “conspiracy theories” or for “over-reacting.” That is what the de Blasios of the world want. It’s not necessarily the virus many citizens are questioning; it’s the abuse of it and the attitude that “you never let a crisis go to waste.”

For the record, the very same de Blasio violated his own stay-at-home orders for a little essential workout at the gym.

We must pay attention to everything, with the mind, as far-fetched as it may seem, that our personal liberties are in no way guaranteed in this life. We should err on the side of being wrong with this concern. For none of us wants the alternative.

Bravo for the good people of New York City for knowing this already.