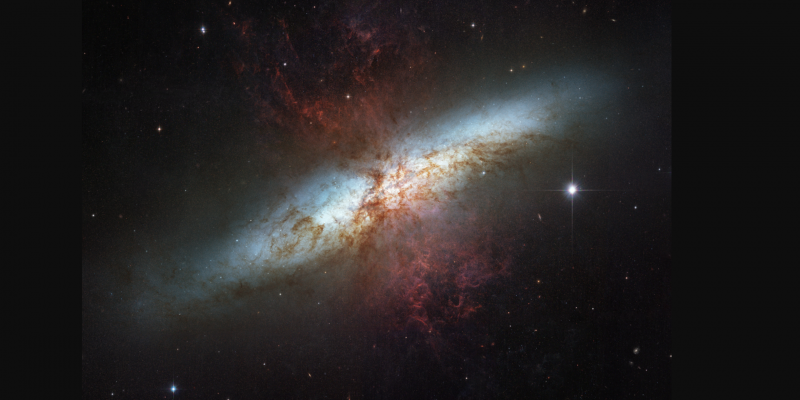 To celebrate the 30th birthday/anniversary of the Hubble Space Telescope operating in space this year, NASA published a new feature online to share images taken in space every day of the year– searchable by a person’a birthday.

NASA’s new online feature, “What Did Hubble See on Your Birthday?” gives users the opportunity to learn what image was taken in space by the telescope on a particular date. Each image is accompanied with information about star or galaxy depicted.

Galaxy M82 is known for its “bright blue disk, webs of shredded clouds, and fiery-looking plumes of glowing hydrogen blasting out of its central region,” NASA says. M82 stars are born 10 times faster than stars in the Milky Way galaxy.

Messier 82 (M82) was published on April 24, 2006, to celebrate 16 years of Hubble Space Telescope operating in space. The image was released by NASA and the European Space Agency (ESA), which was the sharpest wide-angle view ever obtained of M82.

“Located 12 million light-years away, M82 appears high in the northern spring sky in the direction of the constellation Ursa Major, the Great Bear. It is also called the “Cigar Galaxy” because of the elliptical shape produced by the oblique tilt of its starry disk relative to our line of sight.

“The observation was made in March 2006, with the Advanced Camera for Surveys’ Wide Field Channel. Astronomers assembled this six-image composite mosaic by combining exposures taken with four colored filters that capture starlight from visible and infrared wavelengths as well as the light from the glowing hydrogen filaments.”

In the M82 galaxy center, young stars are born 10 times faster than they are inside the entire Milky Way Galaxy, NASA says. The result is a huge concentration of young stars are carved into the gas and dust at the galaxy’s center. These stars create a galactic superwind that compress enough gas to make millions of more stars. The new, young stars in M82 become condensed into massive star clusters.

The clusters create bright patches, or “starburst clumps,” in the central parts of M82 only visible through infrared technology used by Hubble. Most of the pale, white objects sprinkled around the body of M82, which look like fuzzy stars, NASA notes, are individual star clusters about 20 light-years across, containing up to a million stars.

“Hubble explores the universe 24 hours a day, seven days a week. That means it has observed some fascinating cosmic wonder every day of the year, including on your birthday,” NASA said in a prepared statement.

“Spanning a little more than one million light-years, the galaxy is about 10 times the diameter of our Milky Way galaxy. The bloated galaxy is a member of an unusual class of galaxies with a diffuse core filled with a fog of starlight.”

The telescope is only supposed to last until 2030 or 2040, and will be officially replaced by the James Webb Space Telescope (JWST). The JWST is scheduled to launch on March 30, 2021.

To learn about the creator of the universe and the Gospel in the Stars, go here.