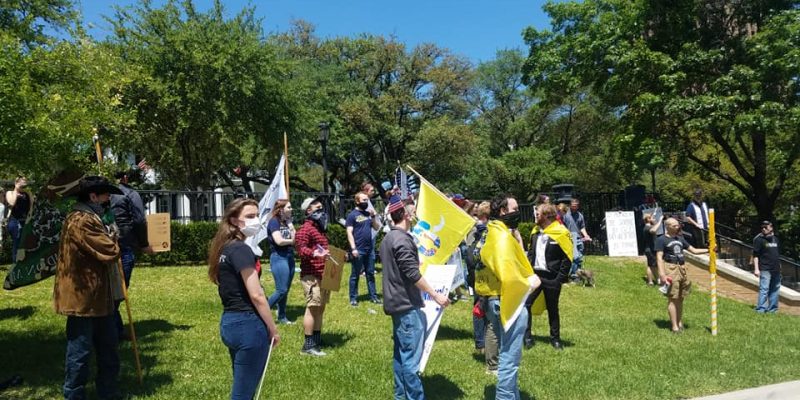 After a month of the government imposed economic shutdown and stay at home orders, hundreds of Texans convened at the Texas Governors Mansion to protest the shutdown and rally to reopen the state for business. The Rally in Austin Texas, while having less overall people than the event in Lansing Michigan the previous day, was more concentrated where the vast majority of protesters were on foot versus in their car since the weather was in Austin was quite pleasant.

The event itself called Open Texas was organized on facebook. Also of note is the Texas Capitol Grounds is under the law enforcement jurisdiction of the Texas Department of Public Safety and not the Austin Police Department. Why this is significant is because of the controversial face mask requirement put in place by the City of Austin, a requirement that has been previously reported by The Hayride to more than likely violates Texas State Law. DPS Troopers on site seemed t0 have no interest in enforcing the requirement which apparently comes with the threat of a $1,500 fine and up to 180 days in jail.

In fact DPS was extremely professional during the whole ordeal, including temporarily blocking off Congress Avenue and 11th Streets to allowing the protesters to cross from their original rally point at the parking lot next to the Texas Governor’s Mansion, to the Capitol Grounds, convene at the South Steps of the Capitol, then return to the original rally point. The only issue brought up was by Doc Greene during his speech at the end of the Rally that DPS was more concerned with the type of flagpole Doc had and not with the size of the crowd, the lack of social distancing, or even the fact that most of the crowd was legally armed.

On top of Doc Greene broadcasting his radio live from the event, numerous news agencies such as Fox 7 and ABC Affiliate KVUE covered the event as well. While no elected officials were on had at the event, at least one candidate, Jennifer Fleck who is a Republican Candidate for Texas House District 47 made an appearance and supported not only the event organizers, but all the Texans that showed up rally for Governor Abbott to reopen the Texas Economy.

With President Trump issued guidelines to reopening the nations economy on May 1st It will be interesting to see the timetable that Texas Governor Greg Abbott with present. We’ll have an update to this article with the Texas Reopening Plan, Ohio’s Governor has already announced his state will reopen May 1 and President Trump even suggested that States could even reopen for business before that date. Also to keep in mind these rally’s will continue across that nation until the COVID-19 lockdowns are over and done with and that includes Texas. There will be another Rally at the Texas Capitol to reopen the state on Saturday April 18, 2020. If it’s anything like Thursday the event will be peaceful yet productive and a reminder what the freedom of assembly really is.