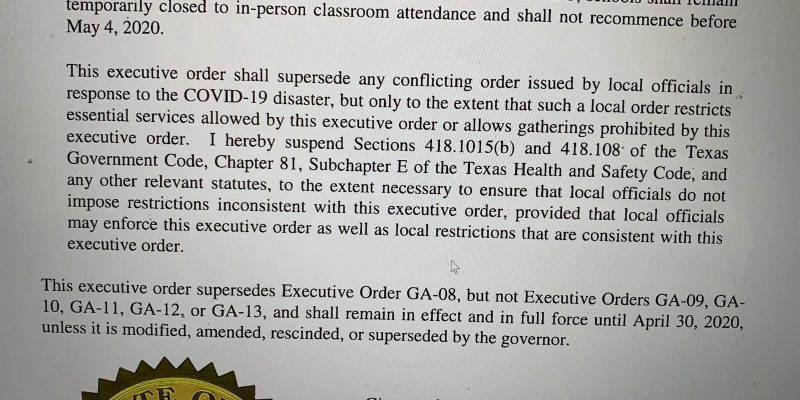 On Monday, when the City of Austin and Travis County issued one-month extensions to their stay-at-home orders, they also added a provision that anyone out in public over the age of 10 had to wear a face mask. As with the previous issuance of the stay at home order, numerous carve-outs were put into place. These exceptions can be made for when people are exercising, are outside only with members of their household or are eating or drinking.

(It can be questioned what is “exercising,” if someone is so out of shape that it’s “a workout” just to get up and walk, wouldn’t that be considered exercising? Jokes aside …)

Many in the Austin Community question the validity of the order itself, including the fact that it could be violating state law. Brent Webster, a former First Assistant District Attorney for Williamson County and past candidate for the Court of Criminal Appeals has been vocal on social media about many of the stay at home previsions violating not only everyone’s civil liberties but also Texas State Laws of Local Preemption, the same type of local preemption that prevent local governments from banning the lawful open carry of firearms.

When asked specifically to clarify his interpretation, Webster stated,

These orders are coming from Government Code Chapter 418.108. Specifically, 418.108 “(g) The county judge or the mayor of a municipality may control ingress to and egress from a disaster area under the jurisdiction and authority of the county judge or mayor and control the movement of persons and the occupancy of premises in that area.” Local Government is NOT given the authority to tell you what to wear.

It’s important to note that Governor Abbott’s order suspended 418.108, to the extent that it was not consistent with his orders. Sec. 418 also creates a criminal offense for violating an emergency management plan under the same chapter:

Sec. 418.173. PENALTY FOR VIOLATION OF EMERGENCY MANAGEMENT PLAN. (a) A state, local, or inter-jurisdictional emergency management plan may provide that failure to comply with the plan or with a rule, order, or ordinance adopted under the plan is an offense.

“That is the punishment, but the emergency order cannot go outside the bounds of what they are allowed to do under 418. Since the Statute does not allow them to require that citizens wear a specific piece of clothing, then it would be illegal to attempt to imprison you for violating a rule they could not enact in the first place. Furthermore, in Travis County, it would be up to the County Attorney to determine if they will accept the charges for not wearing a mask and if they could successfully prosecute those charges, given Governor Abbott’s current executive orders, and the protections found in the Texas and US Constitutions.  The County Judge does not decide who gets prosecuted.”

Webster also presented a portion of Governor Abbott’s Executive Order specifically stating that his Executive Order shall supersede any conflicting order issued by local officials in response to the COVID-19 Disaster With that being present, Governor Abbott should emphasis in his numerous press conferences that local municipalities are prevented by state preemption from regulating clothing. It’s also of interest that Attorney General Ken Paxton has been silent on the matter thus far with his long history of reining in local ordinances that are in violation of state law.