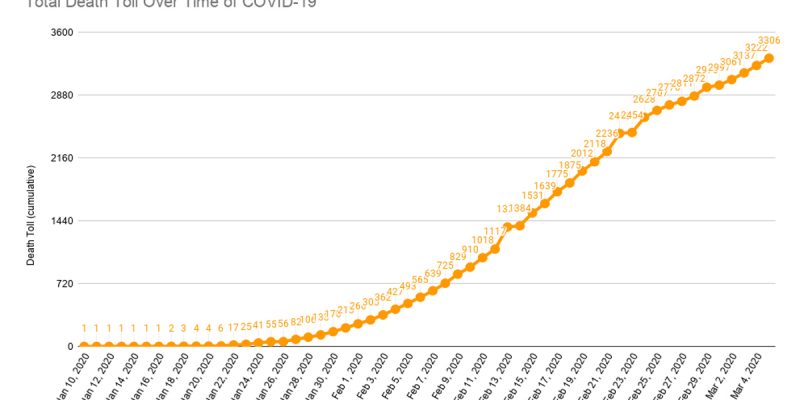 We’ve been harping on this for a couple of weeks now, focusing on it in Louisiana, but last week it started to become a more national thing when Fox News anchor emeritus Brit Hume noted on Twitter that New York’s Wuhan virus death rate reflects everybody who has the virus and then dies, whether they die of the virus or some other cause.

Very informative thread. Explains why NY’s Covid 19 fatality numbers are inflated. They dont’t distinguish between those who die with the disease and those who die from it. https://t.co/Hbdud2ppSI

Hume was pilloried by the usual suspects, but his reasoning was quite sound.

And since we know the vast majority of the people who get a serious enough case of the Wuhan virus to put their lives in jeopardy have some other medical condition acting as a comorbidity, there’s a real gray area in many cases as to whether the virus was the true cause of death.

In Italy, that country’s equivalent to Dr. Anthony Fauci (not a perfect analogy, but near enough to our purposes) admitted that seven out of eight deaths attributed to the virus were really caused by one or more other comorbidities. In other words, the patient was on death’s door whether the virus got to them or not.

Well, Hume’s critics can apologize to him, because his suspicions are now confirmed – not just in New York, or in Louisiana like we’ve been saying, but everywhere.

Dr. Deborah Birx, who everybody seems to like because she dresses so well, admitted those death totals are inflated as a matter of policy.

The federal government is classifying the deaths of patients infected with the coronavirus as COVID-19 deaths, regardless of any underlying health issues that could have contributed to the loss of someone’s life.

Dr. Deborah Birx, the response coordinator for the White House coronavirus task force, said the federal government is continuing to count the suspected COVID-19 deaths, despite other nations doing the opposite.

“There are other countries that if you had a pre-existing condition, and let’s say the virus caused you to go to the ICU [intensive care unit] and then have a heart or kidney problem,” she said during a Tuesday news briefing at the White House. “Some countries are recording that as a heart issue or a kidney issue and not a COVID-19 death.

“The intent is … if someone dies with COVID-19, we are counting that,” she added.

Asked whether the numbers could skew data the government is trying to collect, Birx said that would mostly apply more to rural areas where testing isn’t being implemented on a wide scale.

“I’m pretty confident that in New York City and New Jersey and places that have these large outbreaks and COVID-only hospitals. … I can tell you they are testing,” she said.

This isn’t semantics, so you’ll know. The death totals are a key element of data being thrown around by local and national media all over the country to keep people in a state of panic over the virus and tamp down what would otherwise be a widespread revolt by the American people against the draconian social isolation measures mayors and governors are imposing at the suggestion of federal bureaucrats like Fauci and Birx.

Because if it weren’t for the death rate, you couldn’t scare people over lots of numbers of “cases” of the Wuhan virus. The vast majority of the people who get it don’t have a serious case, and they’re not going to change their lives over an admonition that they might get sick with a cough or a fever. We’re not as tough a people as we used to be, but we aren’t quite that fragile. At least not yet. But when you show a big death rate and scare people that they’re going to die, you’ll get their attention and their compliance.

The latest numbers show that some 12,000 Americans have lost their lives from the Wuhan virus. That’s an equivalent number to those who died during the 2009-10 H1N1 swine flu epidemic. But the swine flu was far more indiscriminate in its victims and comorbidity was much less of a factor than in this case. If the Italian formula turns out to be correct here, and we’ll never really know because nobody is going to do 12,000 autopsies to determine the real causes of death of these poor folks, do you think the public would have allowed itself to be placed under a soft form of house arrest over 1,500 Wuhan virus deaths nationally?

The answer is no, and people would simply have refused to cooperate. They’ve made a very big deal out of the defiance of Tony Spell, the pastor of Life Tabernacle Church in Central who has continued holding church services in defiance of the governor’s stay-at-home order, but there would be 10,000 Tony Spells all across the state, and not just among religious leaders, if we were talking about, say, 70 Louisianans dead instead of just under 600.

President Trump is clearly bristling under this economic lockdown and he has people making noises about getting the country back to work. It’s a decent bet that Jeff Crouere’s column Monday about May 1 as a date when things begin opening back up is right.

But we’ve heard very, very little about when Louisiana will be back open for business, and that had better change soon. This can’t continue forever – not when we’re starting to recognize those who are imposing it on us have not been honest with us.