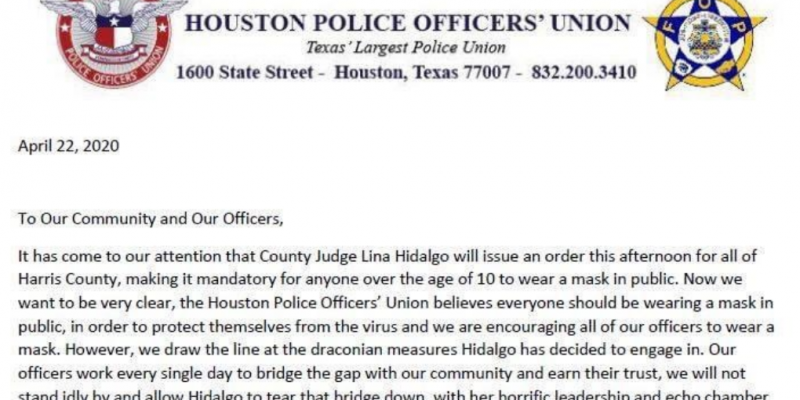 Two days after the Texas Attorney General issued a guidance on houses of worship being able to meet in person, Harris County Judge Lina Hildago extended the county’s stay at home order through April 30, this time requiring all residents to wear masks when going outside or be fined $1,000.

The mask mandate goes into effect Monday unless otherwise stopped by an injunction requested in a second lawsuit filed against the judge.

The Houston Police Officers Union (HPOU) FOP Lodge 110 has also asked the Texas Attorney General’s Office to respond to the legality of what it calls a “draconian” order.

While Harris County states on its website that “COVID-19 is an emerging, rapidly evolving situation,” the numbers of those who have contracted the disease or have died from it appear to provide conflicting information.

The county is suffering from increased crime due in part to the stay at home order, businesses closing from the economic shutdown, and skyrocketing unemployment.

Joe Gamaldi, president of HPOU FOP Lodge 110, said in a statement that “while the union believes everyone should be wearing a mask in public … we draw the line at the draconian measures Hidalgo has decided to engage in.”

HPOU response to @LinaHidalgoTX draconian mask order: “Now we want to be very clear, HPOU believes everyone should be wearing a mask in public, in order to protect themselves from the virus and we are encouraging all of our officers to wear a mask. However, we draw the line…” pic.twitter.com/XbphfNYHii

The union asked the Attorney General’s Office to give an opinion on the legality of the criminal penalty and fine imposed on anyone not wearing a mask in public. Gamaldi says the union is also asking officers to use “discretion, discretion, discretion” because it is “clear that the so-called leader of Harris County lacks any critical thinking skills, but let me assure the public, our officers do.”

In Harris County alone, violent crime has significantly increased in 2020, with murders up by 35 percent and property crimes and burglaries up by nearly 30 percent, he added.

The county jail system is refusing to accept individuals arrested for committing felonies who test positive for COVID-19 and is releasing offenders from jail who have tested positive with virus, according to posts by Houston Police officers on social media to warn residents of communities impacted by the crimes committed.

Conservative Republicans of Texas has organized a “Let Freedom Ring Rally” at 3 p.m. Thursday at the Harris County Administration Building, 1001 Preston in downtown Houston, to protest the order.

The CEO of the group, Steven F. Hotze, who has already sued Hildago claiming violations of the First Amendment and Article 1 of the state constitution, says he’s filing a second lawsuit over the order’s extension and imposition of criminal penalties.

“Enough is enough,” Hotze said in a video posted on YouTube. “It is time to unmask socialism.”

Hotze says the measure is foolish and is calling for a temporary and permanent injunction banning the 30-day mandate.