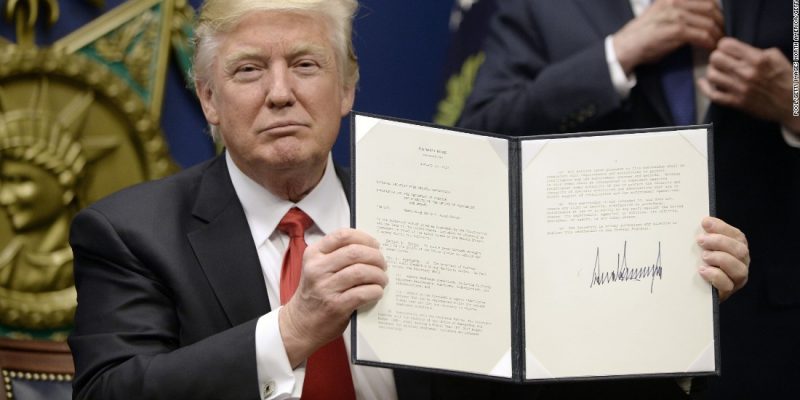 President Trump is receiving praise and criticism for announcing his intention to sign an executive order to halt immigration into the United States amid the struggling economy.

Emboldened by his 2019 Supreme Court victory on the Middle East travel ban, the 45th President made the announcement on Twitter late Monday night:

“In light of the attack from the Invisible Enemy, as well as the need to protect the jobs of our GREAT American Citizens, I will be signing an Executive Order to temporarily suspend immigration into the United States!”

The bold action would ban nearly all immigration and would likely involve the President directing the State Department and U.S. Immigration & Customs Services to suspend the issuing of all immigration visas and green cards.

The U.S. State Department has already halted visa application and refugee resettlement appointments. Secretary of State Mike Pompeo has led the agency in repatriating over 60,000 American citizens since the pandemic began with a remaining 5,000 waiting their turn.

The move would be unprecedented and, depending on the length of time, could lead the U.S. to receiving the smallest number of immigrants in more than a century. White House officials say the order is being drafted and could be signed by President Trump as soon as today.

Foreign citizens pursuing a H1B visa should expect an indefinite delay. Those with legal immigrant status or H2A/H2B visas for seasonal farm workers and healthcare workers are not expected to see any changes.

The Trump Administration has also implemented an executive order to facilitate the expeditious deportation of non-citizens detained along the U.S.-Mexico border.

“Every decision on trade, on taxes, on immigration, on foreign affairs, will be made to benefit American workers and American families.” – President Donald Trump

Interested in more national news? We've got you covered! See More National News
Previous Article Wait, Why Are We Doing the Checkpoint Thing Again?
Next Article LaToya Cantrell “Won’t Be Bullied.” You Will.