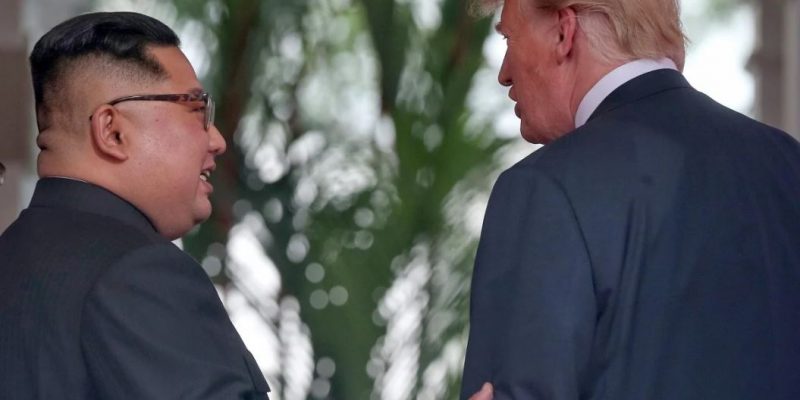 North Korean leader Kim Jong Un has not been seen in public since April 11.

Trump’s answer goes well beyond the words you’ll read in an article. (53:50 in video below)

He said, no, hinted, with an air of secret knowing, that he had a “very good idea” about the health of Kim, and that the U.S. would be seeing him again in the “not-so-distant future.”

It was, for the world, the response from a man who seemed to be itching to say something more, but knew he couldn’t, not at the present moment.

Where exactly is Kim Jong Un?

“Kim Jong Un? I can’t tell you exactly,” Trump said. “Yes, I do have a very good idea, but I can’t talk about it now. I just wish him well.”

The question and response preceded another question in which the reporter indicated that Kim had said something to Fox News on Saturday. Trump immediately cut her off and said that news couldn’t be true if it came from Saturday, moving on to the next question.

“If I weren’t president, you would have been in war with … North Korea. He expected that, that I can tell you. I hope he’s fine. I do know how he’s doing, relatively speaking. You’ll probably be hearing more in the not-too-distant future

Trump would later say that “no one” knows where the North Korean leader is—this to the first reporter who said Kim had said something in an interview with Fox News. (55:39)

“I think the report was incorrect,” Trump said at a White House briefing last week. He added that he understood the reporting to be based on “old documents.”

The President has been evasive when asked when the last time was that he and Kim made contact.

“I don’t want to say. I won’t say that. We have a good relationship with North Korea, as good as you can have.”

What is interesting too is that the news coming from the east is equally ambivalent, as if there is an answer there that no one minds exposing, but just not at this present point in time.

North Korean media organizations, meanwhile, have kept quiet about the swirling rumors, publishing old or undated statements from Kim. On Monday, North Korean state media reported that he “sent his appreciation” to workers building a tourist zone in the Wonsan area. And over the weekend, a South Korean official told Fox News that Seoul believed the North Korean leader was “alive and well.”