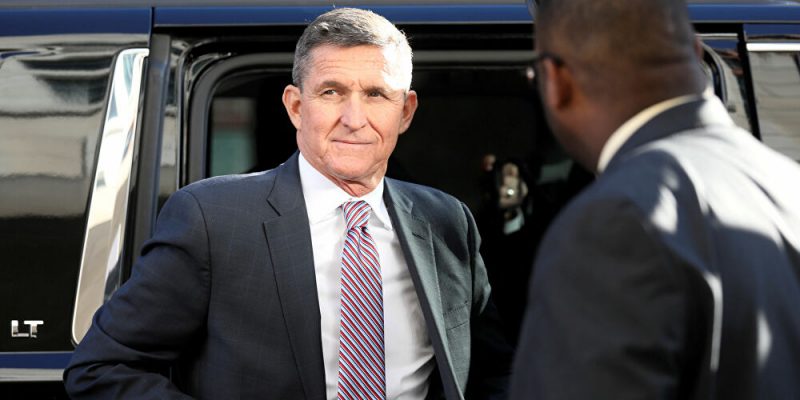 The FBI is supposed to investigate crimes, not fabricate them.  The FBI is not supposed to target an American citizen—a highly decorated military officer at that in Gen. Mike Flynn—and then hatch a plan and create a crime.  If this is not a gross abuse of power, I don’t know what one is.

Please remember that the thing that sets our American system of justice apart from the rest of the world is our legal process.  Due Process.  Due process is critically important; it goes to the heart of our legal system that the accused must be treated as mandated by his constitutional and statutory rights.  This principle is the bedrock of our system that determines guilt or innocence.  Another important principle is that government must prove guilt beyond a reasonable doubt.  None of those guarantees were met here.  Rather, it is now beyond dispute that Gen. Flynn was ambushed; Was essentially framed. How so?

1). Evidence that would have exonerated Gen. Flynn (exculpatory evidence) was never provided to defense counsel, a cardinal constitutional and statutory violation that makes clear the investigators were targeting Gen. Flynn hoping he would perjure himself;

2). The FBI had already conducted a counterintelligence investigation of Gen. Flynn that resulted in it concluding there was an “absence of any derogatory information” to justify investigating any further and the case was set to be closed;

3). However, before the case was closed with, again, no evidence of wrongdoing, the FBI began a criminal investigation.  Why?  What basis was there to interview Flynn on Jan. 24? (an action Dep. of Justice (DOJ)) now says had no “legitimate investigative basis”); why question him about his conversation with the Russian Ambassador when the FBI, as is its practice, already had a verbatim transcript of the call?  And, in a highly illegal and unethical action, FBI agents actually discussed whether the goal of the interview with Gen. Flynn was to “get him to lie, so we can prosecute him or get him fired.”

4). Further, one of those FBI officials advised Gen. Flynn he did not need an attorney with him—which is inappropriate and dangerous, not least because Flynn was apparently still the subject of an investigation; they also did not provide him the standard warning that lying is a crime, nor refresh his recollection by use of recordings or a transcript; He was also encouraged not to report the FBI’s desire to speak with him to either the DOJ or to his superiors at the White House—including the White House Counsel Office (either or both of which would very likely have advised him not to take the meeting or, at a minimum, have an attorney with him when he did);

5). After the interview, with agents not having gotten what they needed to successfully execute the trap they were trying to set, there were multiple “edits” made of the official report of Gen. Flynn’s interview.  This, notwithstanding that one of the interviewing agents concluded that Gen. Flynn “did not intentionally lie”; however, that agent’s impression seems later to have “changed.”

I’m not minimizing Flynn’s guilty plea; not at all.  All accounts are that this ordeal was very hard on he and his family and his legal defense cost him millions of dollars he didn’t have.  So, there are personal reasons he may have wanted this charade to end and a plea was the way to do so.  But that’s not really the issue.  In this case, there are numerous prosecutorial violations of rules.  So, unsurprisingly, the DOJ this week dropped the case after concluding Gen. Flynn’s rights were egregiously violated.

This is a miscarriage of justice.  A travesty.  We should find it chilling that these violations and abuses of rights could be inflicted on any American; If someone of Gen. Flynn’s knowledge and experience can be targeted by our own government in this way, how could we possibly think it couldn’t happen to any one of US!  Is there any wonder the trust of the American people in government institutions is at an all-time low.   Regardless of how someone may feel about Pres. Trump, these core due process violations are damaging to all of us and will continue to have ramifications long after he is gone.