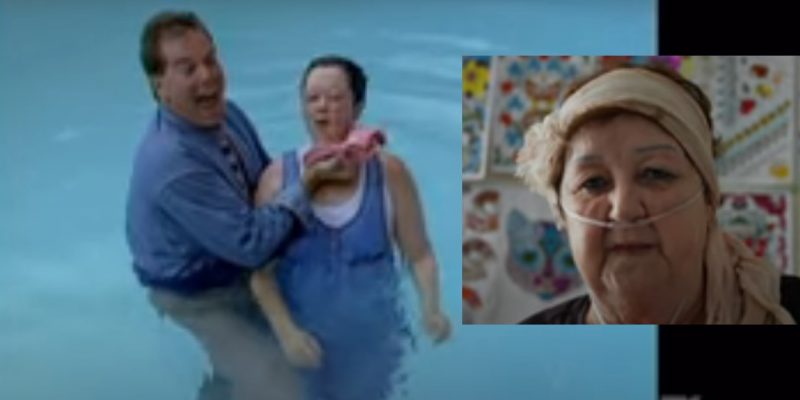 A documentary released over the weekend advertises itself as a smoking gun that finally tells the truth about the life of the central figure of the Roe v Wade decision.

Keyboard warriors on the Left are already busy hailing this as documentary as proof-positive that Norma McCorvey‘s conversion from abortion clinic worker to pro-life hero was insincere, the product of stereotypical-greedy mass evangelists.

But what it ends up being is another messy detail in the life story of McCorvey, “Jane Roe” in the landmark High Court case that opened the floodgates to abortion as a common form of birth control across the U.S. in 1972.

According to the marketing leading up to the release of “AKA Jane Roe,” now airing on cable channel FX, McCorvey had made a “deathbed confession” that her conversion to Christianity was bought and paid for by profiteering charlatans — collecting nearly half a million dollars in total (a pittance when compared to speaking fees for nationally known figures, even at the time). But like the tapestry of McCorvey’s life, which came to its mortal end in 2017, the truth is much more complicated.

Sheila O’Malley of RogerEbert.com reviews the documentary as having successfully captured “McCorvey’s rambunctious humorous personality” while ignorant of an overarching detail of her life (which we will explain below).

McCorvey is asked if she felt she was a “trophy” to the pro-life movement, and she says, “Of course. I was the Big Fish. I took their money and they took me out in front of the cameras and told me what to say … I’m a good actress. Of course, I’m not acting now.” […]

There are surprises, like McCorvey reciting the entirety of Macbeth’s “Tomorrow and tomorrow and tomorrow” soliloquy as she is wheeled around a public park. He [director Nick Sweeney] also interviews two important figures on the evangelical right. There’s Flip Benham, a frankly charismatic wolf in sheep’s clothing, a snake-oil salesman if ever there was one. He targeted McCorvey early, setting up an Operation Rescue office next door to the abortion clinic where McCorvey worked. His tactical patience worked like a charm. McCorvey found the belonging in the pro-life movement she hadn’t found in the pro-choice movement. In order to understand this, you’d need to walk in McCorvey’s shoes: not wanted by her parents, neglected and abused, sexually molested by a relative, tossed to the wolves at a very young age. Is it any wonder that she would have soaked up the attention of a group who embraced her wholeheartedly, supporting her financially?

And now we know she was paid to be there. Can she be blamed for wanting that money? The cost, though, was her relationship with Connie, her partner of many decades. Benham forced “Miss Connie” and “Miss Norma” (as he calls them) to end their relationship. It’s heartbreaking.

Almost immediately, those who knew McCorvey rushed to defend her Christian and pro-life credentials. Many recalled a McCorvey who lived in poverty and depended on donations from the organizations which were eager to put a spotlight on her conversion. A few recollections may be read here via Christianity Today.

That McCorvey publicly professed Christ as her Savior in 1995 and was baptized (with national news television crews present) by Rev. Benham, ordained in the Free Methodist denomination, is not disputed. According to her friends, the subsequent tours organized (and apparently financially sponsored) by Benham’s Operation Rescue and other groups put McCorvey under much anxiety. She began to withdraw from the limelight.

Here’s where it gets sticky: McCorvey, a native of Simmesport, Louisiana, grew up off and on around the Catholic faith. This is what she was accustomed to, even if not previously catechized. On Aug. 17, 1998, McCorvey was finally received into the Catholic Church in a service celebrated by pro-life Catholic cleric Edward Robinson and joined by anti-abortion champion and priest Frank Pavone, witnessed by the congregation of St. Thomas Aquinas Church in Dallas.

McCorvey’s second book, “Won By Love” (published just before her formal union with the Catholic denomination), recalled her conversion under Benham’s influence as legitimate — her heart convicted over her sins at the sight of a fetal development poster on the wall of an Operation Rescue office. But if one to believe the advance marketing hype for “AKA Jane Roe,” she was paid to leave her same-sex partner, pretend to pro-life, and maybe even fake her religion.

Missing from most film reviews of and social media reactions to “AKA Jane Roe” is any mention of McCorvey’s return to/joining the Catholic faith. If she was Christian at all, she was a Roman Catholic — having only been under Benham’s more Protestant and Evangelical ministry for two or three years at max. That’s a blink of an eye compared to nearly 30 years of post-conversion life.

According to the personal vindications in CT:

In the final hours […] McCorvey’s family asked her to share some music. She sent the prayer songs that she had been listening to during the time that she’d spent with McCorvey in the hospital and in hospice. One of those songs was “The Lord Is My Shepherd.” The family played that songs [sic] for McCorvey, resting the phone on her chest.

We are also told she received some final rites in her last days.

Her life as a Christian and a pro-life advocate may have started under the auspices of a ministry heavily dependent on publicity and donations, but it ended a much more personal and heartfelt affair. And that does not make her decision to follow Christ or defend a pro-life ethic any less sincere, even if getting off to a rocky start.

Film review writers and marketeers who cannot discern that miss the point of the staying power of sincere faith. We can expect progressive keyboard activists — despite Sweeney’s summation that McCorvey’s convictions were sincere leading up to her passing — to totally ignore that fact in favor of their own pro-abortion bias.

The truth remains that Norma was a complex person, and so is her story. If she was paid for at all, it was by the blood of Christ, not by any measure of “snake oil.”

Note: This writer met McCorvey through mutual friends in North Texas and maintained a light social media friendship with McCorvey in her latter years. She may have been recalcitrant and sharp-tongued, but never insincere, even when discussing our denominational differences. She is greatly missed.

UPDATE: Corrections made to reflect that “Won By Love” was released before her conversion to Catholicism, not after. Other minor edits made (10:50 p.m. 5/25/20).

Interested in more news from Texas? We've got you covered! See More Texas News
Previous Article ALEXANDER: The Flynn Case Should Concern Us All
Next Article RUSHING ATTACK: LSU’s Backfield Should Be Scary Good in 2020