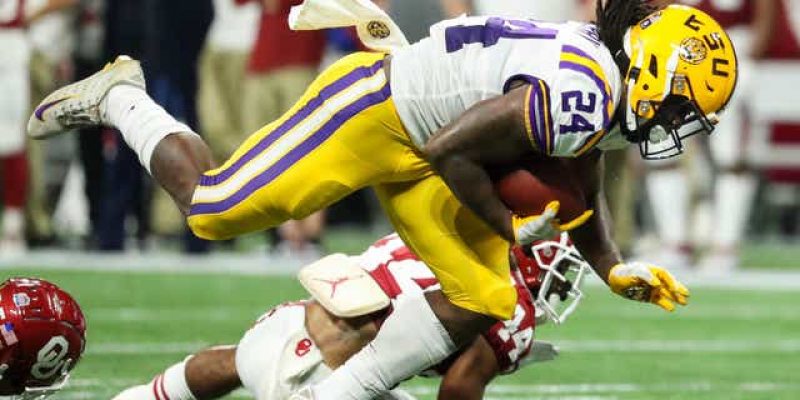 This was the stable of running backs LSU boasted during that dominating 2011 season that was one win away from being considered the greatest season in college football history. To that point, of course.

But the 2020 Tigers should be just as explosive, albeit with a slightly different look. There are still weapons galore for new quarterback Myles Brennan to throw to, but next year’s backfield won’t be made up of a single jackhammer in Clyde Edwards-Helaire.

In fact, the Tigers’ backfield will be so loaded that it may prove to be the key to Brennan’s success and a second consecutive playoff appearance for the Tigers.

Those are the new names of a very familiar looking LSU power running game. Three sophomores and one freshman. And Coach O is licking his chops at the possibilities.

“Excited about Kevontre Bradford. He’s kind of a silent guy, nobody knew about him,” Orgeron said. “We think he’s going to be an excellent player. Excited about Chris Curry, the toughness that he brings. Tyrion looked good the other day. John Emery’s electric. All four of those guys got different skill sets.”

Redshirt sophomore Curry has the most experience, if you can call it that, carrying the ball for 90 yards on 16 carries in the Tigers’ Peach Bowl rout over Oklahoma in December, when Edwards-Helaire was injured. Buried at the bottom of the depth chart for much of the season, he proved his character and integrity by not entering the transfer portal and earning Burrow’s endorsement for the semifinal game.

“It was a blessing tonight,” Curry said after that 63-28 win, “I feel like everybody forgot about me, but the coaches didn’t. I thank Joe Burrow a lot for speaking up and saying, ‘Hey, let’s go with this kid right here.’”

Curry of course will have competition from three superstar recruits, but that doesn’t mean all won’t get their ample chances.

“First off, you will probably see a rotation early, unless a guy just breaks out from this point on into camp and shows he has been mature throughout the whole process,” new running backs coach Kevin Faulk said. “Not being able to see the athletes, that is difficult for a coach. When they get here, it will be one of those things that will show very quickly.”

The most highly touted of the group, Emery Jr, was expected to beat out Edwards-Helaire last season, based solely on his five-star ranking out of college in 2019. But while Edwards-Helaire was carving out an NFL first round grade for himself, Emery struggled to crack the field. It turns out there was a very good reason for that.

He couldn’t see out of one eye.

What was the first thing he said after undergoing successful LASIK surgery?

“Every one of them has some very positive skill sets and we plan on playing all three of those guys,” Orgeron said. “There are some things they need to get better at, but just like Clyde kept on developing, I’m expecting one to have a breakout year. We’ve had one have a breakout year every year since we’ve been here.”

No matter if someone breaks out or not, all signs point to a dynamic rushing attack in Baton Rouge in 2020. It may in fact be better if the coaches stick with the by-committee approach. It worked in 2011 and will only stabilize the offense while Brennan works through the inevitable growing pains of being a first year starting quarterback.