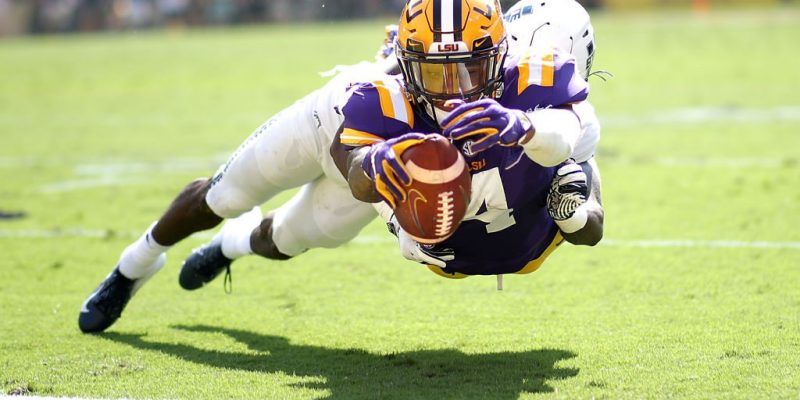 Take a timeout to consider that LSU’s top recruit from the 2019 class, a 5-star running back out of Destrehan, was legally blind in one eye his entire life.

The top running back in the country coming out of high school, John Emery Jr played in ten games as a freshman in the Tigers national championship run, rushing for 196 yards on 39 carries with four touchdowns. Now that all-everything back Clyde Edwards-Helaire is forgoing his senior season to enter the NFL draft, the sophomore figures to play a prominent role in LSU’s rushing attack in 2020.

Especially now that he has 20/20 vision. How appropriate that it should come this year.

What was the first thing he did after undergoing successful LASIK surgery?

Happy as a kid who just saw Mike the Tiger for the first time, telling his father John Emery Sr all about it.

Emery Jr, who had originally committed to play for the Georgia Bulldogs early in the recruiting process, is also ecstatic about simply being an LSU Tiger. Some fans may have been wondering if Emery would test the transfer portal after seeing such limited action this season, but he put that concern to rest on Twitter shortly after the semifinal game against Oklahoma.

Emery seemingly spent his first year at LSU learning the lay of the land. He is very aware of his shortcomings, and that he will have to combine a better attitude with his talent if he is to realize his potential.

Of course being able to see doesn’t hurt.

“As far as being accountable,” he said when asked by Geaux247 where he has grown the most. “Showing up on time. It’s just the little things that really I’ve grown, the little things I see. I feel like I’ve gotten more comfortable. I had to learn the speed of the game when I got to college. I feel like every freshman has to. It takes time. I feel like the speed–it came to me since we came this far in the season. Learning the speed and the different defenses–that helped a lot.”

The 5’11, 206-pound sophomore is looking forward to teaming up with fellow 2019 recruit Tyrion Davis-Price, another top-10 running back coming out of high school.

“Well, you know like Coach O says, it’s like a thunder, lightning-type deal. Next year should be our year and [we’ll] go from there.”

The two sophomores will form a three-headed juggernaut of a backfield along with redshirt sophomore Chris Curry, who showed a bruising, Marshawn Lynch-type style of running in the semifinal victory over Oklahoma. LSU may very well look a little more like the punishing teams of old in running the ball more than last year in order to protect a first-year starting quarterback, likely Myles Brennan.

If Emery takes his game into the stratosphere where it should be, he will be seeing a lot more playing time, and quite possibly seeing the Tigers to another trip to the College Football Playoff.