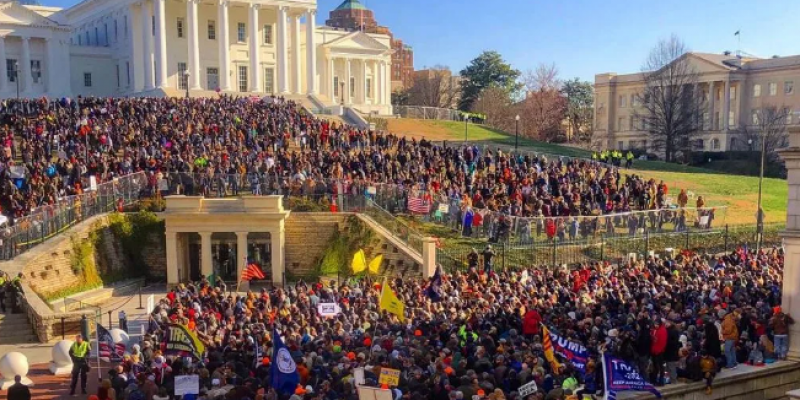 By a narrow margin, the Virginia House of Delegates approved one of the strictest gun control measures in the country.

But those fearing the worst need not flee to a Second Amendment sanctuary county just yet. The bill has a steep climb ahead in the Virginia Senate.

Having passed the House by a vote of 51-48 on Tuesday, HB 961 was opposed by each of the chamber’s 45 Republican members and three allies crossing the aisle. The Republicans were joined by Democratic Delegates Lee Carter, Steve Heretick, and Rosalyn Tyler.

Meanwhile in the upper chamber, the Senate of Virginia has 21 Democratic members and 19 Republicans — a slightly narrower partisan margin. As with the House, there are several moderate Senate Democrats who have signaled opposition to proposed legislation earlier this year.

The next stop for the bill is the Senate Judiciary committee, where it will meet a similar Senate companion bill. The committee has yet to schedule a hearing.

HB 961, if passed, not only would ban the sale of certain semi-automatic firearms, including popular AR-15-style rifles, but would add a legal definition to the amorphous political attack term “assault rifle.” Under the definition, an assault firearm would be defined as “a semi-automatic center-fire rifle that expels single or multiple projectiles by action of an explosion of a combustible material with a fixed magazine capacity in excess of 12 rounds.”

The bill also bans standard capacity magazines, and other accessories that could be used to turn a firearm into a banned configuration.

According to an update posted by the American Suppressor Association, HR 961 was modified in committee last Friday to remove the language mandating confiscation of legally-acquired firearm suppressors. That text was replaced with a ban on future sales, transfers, and manufacture of the accessories.

In addition to outlawing sales, the legislation would also prohibit gun dealers from renting, trading, or transferring an assault firearm to any person.

Earlier bills and drafts of similar legislation would have required current owners of “assault weapons” to turn them in or register them with state police. HB 961 no longer contains that provision, but “grandfather” clauses like the one now included are effectively confiscation in the long run as the bill still prohibits transfer of the affected firearms through inheritance.

The specter of a far-reaching, outright ban on semi-automatic weapons has the gun rights community on watch.

Thanks to organizing efforts from the Virginia Citizens Defense League (VCDL), around 22,000 people descended upon the Virginia Capitol to protest anti-gun proposals in January. Citing concerns over violence, Democratic Gov. Ralph Northam declared a state of emergency on the capitol grounds. Ultimately, one non-violent arrest was made and no violence was reported.

VCDL and its members have taken proactive measures. By last count, 91 out of 95 Virginia counties, 16 out of 38 independent cities, and 34 towns have adopted so-called Second Amendment sanctuary resolutions vowing not to honor further gun control out of Richmond.

As it stands, Virginia enjoys a moderate regulatory environment with respect to Second Amendment rights. Open carry is allowed and permits to purchase a firearm are not required, though gun shows are regulated by the state. The pro-control Giffords Law Center gave Virginia a “D” for its existing laws, while Guns and Ammo magazine ranked the state No. 31 out of the 50 states in terms of firearm freedom. In short, Virginia is in the middle on gun rights.

Things began to change in modestly gun-friendly Virginia in the months following court rulings that mandated new maps be drawn — asserting that state legislative district lines as previously drawn amounted to gerrymandering. A 5-4 federal Supreme Court opinion in June of 2019 rejected any further changes to the maps, meaning that new district boundaries would go into effect before the fall’s legislative elections. This development, in theory, handed several key victories to Democratic candidates.

In response to the gun control push, Todd Gilbert, Virginia’s House minority leader, took to Twitter to express his warnings:

“Any legislation that requires Virginians to surrender or destroy their lawfully possessed firearms or standard-issue magazines is tantamount to confiscation and a gross violation of our constitutional rights. Governor Northam and House Democrats are still going after law-abiding citizens with these policies, and Virginians who merely own the most common types of firearms and accessories would be made to be felons and subject to prison. House Democrats seem to have learned nothing from the public outcry caused by their proposals. A similar Senate version of House Bill 961 is exactly what prompted the ‘Second Amendment sanctuary cities’ movement across Virginia. These efforts will continue to divide Virginia and without any meaningful public safety outcomes whatsoever.”

Virginia Secretary of Public Safety and Homeland Security Brian Moran said in a statement that mass shootings such as the Virginia Tech massacre in 2007 (where pistols were used) are justification for a ban. The statement further read, “assault weapons are not protected by the Second Amendment because they are weapons of war.”

From the hip: The bill has a rocky road ahead, while Gov. Northam anxiously holds his pen ready to sign. Democratic Senator Lynwood Lewis stated he will not support a gun ban. If he keeps his word, only one additional Democrat would need to cross the aisle to kill the bill. Lewis was previously joined by fellow Democrat Chap Peterson in to defeat a previous bill, SB 67, which would have mandated reporting of stolen firearms within 24-hours of their disappearance. Lewis and Peterson aren’t the only Democrats to cast doubt on bans. Senators Creigh Deeds and John S. Edwards are also seen as potential sway votes.

The most reliable polling has only a bare majority of Virginians in favor of some form of gun control, and that’s with weasel-word phrases such as “assault weapon” in the survey.

The battle over gun rights will be no different than any other political struggle in this notorious swing state. But for now, Virginia is in a strange place with synthetically created districts giving gun control advocates a slight edge. Political observers in the Old Dominion know this, and that is why gun rights advocates are not ready to throw in the towel.