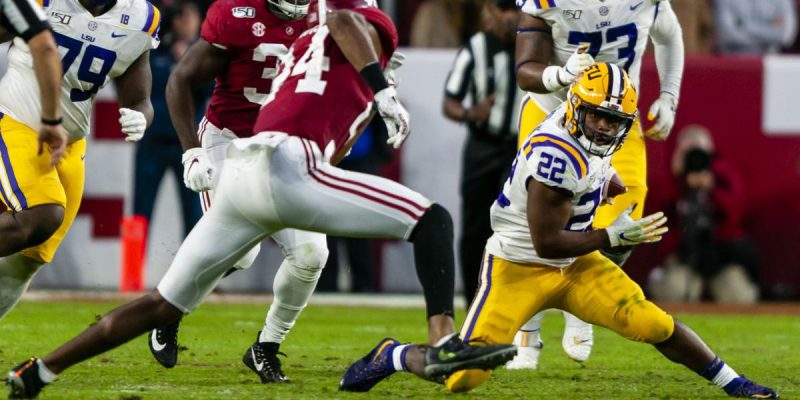 The tears were rolling more than an Alabama Crimson Tide.

“It was just an overwhelming feeling,” Edwards-Helaire said, struggling to put words together to describe it.

This one moment in the 2019 season encapsulates everything the 5’8 back from Baton Rouge is all about.

And now he is drawing comparisons to an NFL player who spent much of his career to this point with the New Orleans Saints.

Mark Ingram won a Heisman Trophy and a national championship at Alabama, and was a first round pick of the Saints in 2011. Ingram has earned three Pro Bowl selections in his career, two of which were with the Saints (2014, 2017) before he signed a free-agent deal with the Ravens before last season.

On the heels of a breakthrough, national championship-winning season in which he amassed 1,867 total yards from scrimmage, Edwards-Helaire is a legitimate draft prospect and potential starter in the NFL, much like Ingram was nine years ago. Recently, ESPN draft analyst Matt Bowen analyzed some of Edwards-Helaire’s film and saw the comparison to Ingram, who also wore No. 22, with the Tide.

It is certain that Edwards-Helaire would gladly take a similar career path as Ingram has taken. He had to overcome onslaughts of doubt throughout his career, largely because of his size. He finished his career at 5’8, 209 pounds. Ingram is 5’9, 215.

It is this character that bubbled forth toward the end of the Alabama game, that will likely make him a steal for some team looking for talent and heart in the NFL Draft.

No, football fans don’t often see this kind of emotion in an NFL player. But you know it’s in there, despite the oftentimes hardened exteriors we see. Mark Ingram has made a living being a smallish, tough running back in the league. I’m not sure if he’s ever cried tears of joy over a football game, or exactly what character he has inside, but if Edwards-Helaire can combine his own personal integrity with the Ingram-like measurables Matt Bowen identified, this Baton Rouge boy will be a hard man to catch for years to come.