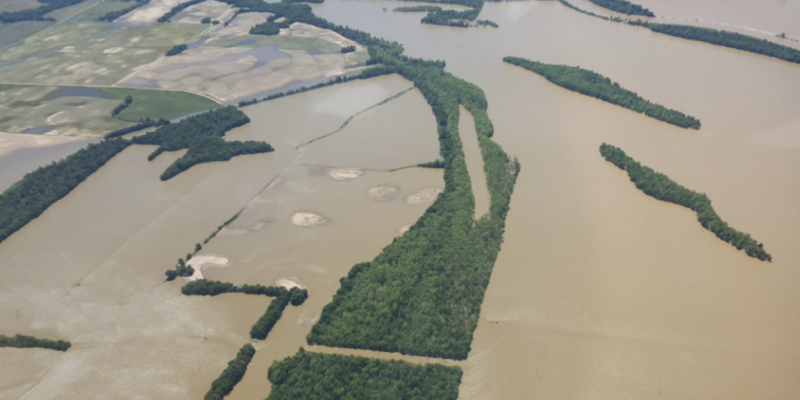 First, here was a press release from Rep. Steve Scalise’s office on what came out of President Trump’s executive budget…

“After years of hard work, I’m very glad that the Corps included over $160 million for critical infrastructure projects in Louisiana, including $85 million to deepen the lower Mississippi River to 50 feet. As home to the mouth of the Mississippi River, this is excellent news for Southeast Louisiana and our ability to move more commerce through the Port of New Orleans!

“The Mississippi River Basin has an unprecedented impact on our national economy, global competitiveness, and American job creation. Modernizing our infrastructure and deepening the river to 50 feet will help strengthen Louisiana’s dominance in domestic and international commerce.

“This critical project also provides a dual benefit of rebuilding Louisiana’s vanishing coastline. Deepening the river will give the state the ability to take that sediment and use it to rebuild our coast, increasing lifesaving flood protection. I applaud the Corps for advancing this project and for their commitment to maintaining our waterways which are not only vital to Louisiana’s economy, but also to our national economy,” said Whip Scalise.

“Louisiana – where the American tugboat, towboat and barge industry supports over 50,000 jobs and generates over $2.5 billion in GDP annually – is an epicenter of American maritime commerce,” said Jennifer Carpenter, President and CEO of the American Waterways Operators. “This industry’s ability to provide for the people of Louisiana and the nation requires that vital waterways like the Mississippi River be maintained at the level necessary to support the uninterrupted flow of commercial traffic. AWO applauds Whip Scalise for ensuring that Mississippi River is able to facilitate the high volume of maritime commerce coming into and out of Louisiana to support our national economy.”

“This is fantastic news for the Port of New Orleans and the entire Lower Mississippi River,”said Brandy Christian, Port President and CEO. “We applaud the efforts of our Congressional delegation, as well as the Big River Coalition and Louisiana’s maritime stakeholders to secure the necessary funding for the future of international commerce in Louisiana. A deeper Mississippi River channel will benefit ocean carriers, shippers, growers and manufacturers alike and is essential to the Port’s competitiveness in the global economy.”

So the $85 million for deepening the channel of the Mississippi is in addition to $250 million to do dredging of the river, and we assume part of that money will be spent to shoot sediment into the marsh and reverse some of the effects of coastal erosion. Diversion projects generally do a lot more than dredging in order to create significant land growth, but every little bit helps.

But what’s not in the Work Plan for this year is something that needs to be added next year. Namely, the Mississippi’s channel needs to be deepened and dredged on the other side of Baton Rouge.

We talked about this here at The Hayride a good bit last year, when the Mississippi rose so high that the Bonnet Carre Spillway had to be opened twice, and for significant parts of the year. The river has been high enough already this year to raise flood concerns as well.

And there is a good reason for that, which is that the river is beginning to silt over between the Old River control structure and Baton Rouge. It’s trying to change its course to run down the Atchafalaya, which is something that would be a global catastrophe should it happen.

So the news from the feds is good. But it isn’t great. At some point soon, there simply must be federal dollars spent on dredging and deepening the river south of the Old River Control Structure to relieve the pressure on that facility.