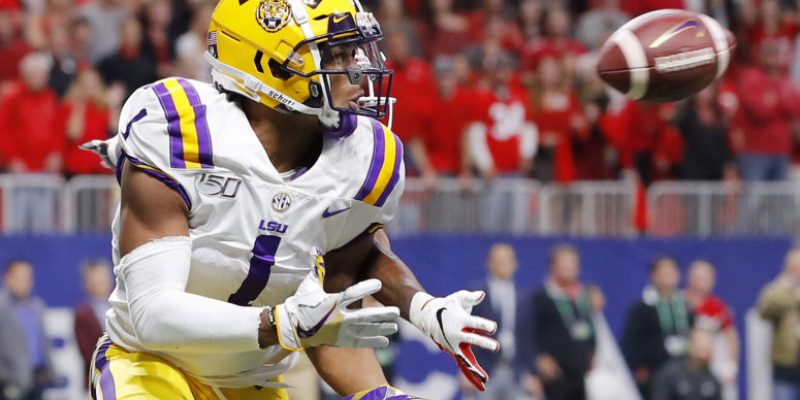 For all the star power and fireworks LSU’s wide receivers displayed on the field in 2019, there is one aspect of the group that is wholly overlooked.

It is a word known to all coaches and sports fans alike, but usually applied only to whole teams.

Chase, NFL-bound Justin Jefferson, and rising junior Terrace Marshall Jr were as impressive and formidable a trio as any in college football history.

The numbers don’t lie and are worth a second, third, and fourth look.

Astounding, is likely the word.

But you can also get astounding in the Big 12. And last I checked they haven’t sniffed a national title in a year or two.

It is chemistry, and dare I say humility, that separated this group from what a fan might expect from a receiving corps as talented as it was.

The wide receiver position in football can be known as a pre-Madonna-type spot, where the best of the best want the ball in their hands at all times and at all costs to the team. Perhaps this element is more noticeable at the professional level, but make no mistake about it, college receivers have the same blood in them.

They want the ball and they want it in either open space or in the endzone.

Here is a truth no one is talking about: Chase, Jefferson, and Marshall Jr coexisted in a system that defied this reality and logic.

Not only did you never hear of any animosity toward coaches or each other, but you witnessed each player take their turn in the winner’s circle, so to speak. By extension, each player also took their turn in a circle that didn’t include the gaudy stats or racous applauses in the stands that other games produced.

It was Jefferson, for instance, and not Chase, who was on all the midseason All-America teams. He outgained Chase in seven of the 15 games, including the SEC Championship tilt against Georgia and the CFP semifinal against Oklahoma. In one of the eight games in which Chase outgained Jefferson, it was by only four yards.

Jefferson’s pinpoint route running, given the nature of the offense and its meticulous tree-shaped routes, was another key in getting other players open–and for them to shine. A comparison, on a much higher level of course, would be Michael Thomas of the New Orleans Saints.

Conversely, when Chase had his moments, it was sometimes to the detriment of Jefferson’s numbers. In week 4 against Vanderbilt, for instance, Chase exploded for 229 yards and four touchdowns on ten catches, while Jefferson, who had led the Tigers in receiving the first three games of the season, produced only 18 yards on two catches.

It was in the second half of the season that Chase won the Biletnikoff, not the first.

And then you have Marshall Jr, of course, a third-wheel any other team in the country would have had as their No. 1 target. Despite missing three games with a foot injury, Marshall Jr was still a weapon to be feared, especially in the red zone, where he was quarterback Joe Burrow’s primary target.

And by all accounts, just like Chase and Jefferson, a selfless teammate to be respected.

These three superstars worked together in a way no one could have expected. On top of that, they were also selfless (and excellent) blockers down field for both each other, and for the Tiger running backs.

Chemistry was the unsung characteristic of the 2019 LSU receiving corps.

It is a reality that no amount of returning talent can anticipate. Will Chase and Marshall be as patient with a new quarterback as they were with the legendary, can-do-no-wrong Burrow? How will the top tight end recruit in rankings history Arik Gilbert fare? Where will returners Racey McMath, Trey Palmer, Jontre Kirklin, and Jaray Jenkins fit in? Can either of the true freshmen, five-star Kayshon Boutte or Alex Adams, make an immediate impact?

The Tigers return every starting wide receiver from last year’s team, and add some explosive young talent, which makes this 2020 LSU receiver corps probably the best in college football–on paper.

But on paper doesn’t win championships. On paper does not produce the “One Team, One Heartbeat” mentality Coach Ed Orgeron believes in. Whoever steps into the vacated roles at the position, and no matter if Chase and Marshall Jr put up All-American numbers again, it will be the actions and attitude of each young man away from the limelight of television and social media that will determine how good they are.