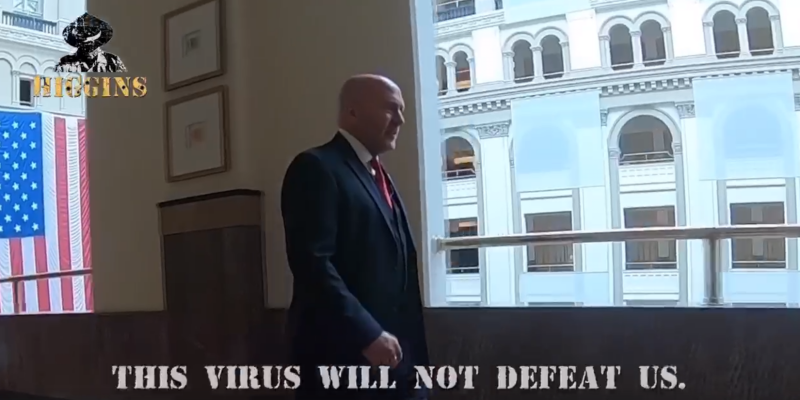 Congressman Clay Higgins and 20 Republican U.S. Representatives are suing Speaker of the House Nancy Pelosi, Clerk of the House Cheryl Johnson, and House Sergeant at Arms Paul Irving for allowing voting in the U.S. House of Representatives for the first time in U.S. history.

Democrats signed a piece of paper saying they were physically unable to go to work because of the coronavirus, but they are doing all kinds of things– like going to the Space X launch, Republican leader Kevin McCarthy from California argues.

"Democrats signed a piece of paper that said they were physically unable to come to Congress, but Charlie Crist was able to… go to the launch across the state.

He lied to his constituents? He lied under oath?"@GOPLeader blasts Democrats for using proxy-voting. pic.twitter.com/maVBiYGp7E

By doing so, members of the House have voted multiple times.

70 House Democrats are giving their votes away to someone who does not represent their district or their constituents. That means the voices of more than 48 million people in America are being ignored, while their representative continues to collect a pay https://t.co/fZln7JuUzb

The House voted by proxy to change a rule allowing for members to vote by proxy instead of in person. They can assign their vote to another lawmaker, who was at the Capitol to cast their vote. By doing so, they approved the rule change by a vote of 217-189.

According to the House clerk, many lawmakers transferred their voting power to another representative.

In addition to Louisiana Congressmen Higgins, and Steve Scalise, 19 other members of Congress joined the suit, along with 4 constituents.

“Through the Yellow Fever of 1793, the Civil War; the burning of the Capitol during the War of 1812, the Spanish Flu of 1918, and 9/11, Congress has never flinched from its constitutional duty to assemble at the Nation’s Capital and conduct the People’s business. Congress assembles.”

“Madame Speaker Pelosi’s proxy voting scheme is completely unconstitutional. We have been working on this litigation challenge since the House Democrats clarified that they intended to actually change over 200 years of Representative Republic House procedure and greatly reduce Congress’ accountability to the American people. I have been a vocal opponent against this rules change, and today we are moving forward with a solid legal challenge. Congress is mandated to meet and conduct the People’s business in person. This was the clear intent of our Founders. No American has ever voted for Congressional representation by a plastic digital card. We vote for human beings. We expect to be represented by human beings. We will ultimately prevail in our determined effort to block the Democrats proxy voting plan and their overall strategy to dehumanize America.”

Higgins also posted a video on Facebook, saying that no enemy has defeated America including the coronavirus and “we are ready to get back to work.”