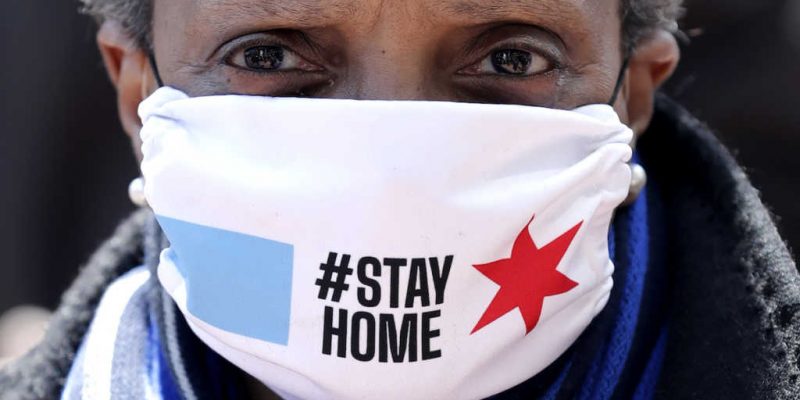 It is becoming increasingly evident that Chicago Mayor Lori Lightfoot is definitely not light in the foot when she wants to place it squarely in someone’s ass.

I’m not playing. Stay home (your own home). Save lives.https://t.co/jPUdaRsoTp pic.twitter.com/bStBdWKIVT

Sometimes the videos in these articles provide supplementary material only. But truly, to understand the context and weight of this story involving Pastor Courtney Lewis and his Cornerstone Baptist Church, the reader should watch that one above. It is in the words, yes. But it is more so in the tone.

Lightfoot has issues with the way America works. She is one of the many local politicians across the country doing their latest and best to reshape and redefine this country.

Pastor Lewis said he was in the middle of delivering his sermon on Sunday, when armed police officers began banging on the doors of the church. The cops were sent by the Democratic mayor, who said in early May—in the above video—that she was “watching” and ready to imprison anyone stepping out of line.

“Like the Soviet-styled KGB, they knocked on our locked doors,” he wrote in a letter of grievance to US Attorney John Lausch. “The only thing she hasn’t done yet is beat the doors down and arrest our members.”

You better believe Lightfoot would want nothing less than to do that.

In all, there were three police cars, two unmarked cars, and a representative from the mayor’s administration. All were denied entry, as the church had implemented normal safety precautions due to prolific gun violence in the city.

An usher outside the church reportedly saw the mayor’s representative try to force their way into the building but couldn’t. The representative and the officers then resorted to taking pictures and filming attendees arriving for services.

To be fair, it is unknown how these attendees arriving for services could get into the building if it was locked. And if the building was subsequently unlocked for them, this seemingly would have provided access for the city’s authorities.

Still, the nucleus of the story should be frightening for Americans concerned about liberty.

“The mayor wants to educate everyone into compliance–which means intimidate,” Lewis said.

“She is one of few former US Prosecutors in the US to be censured by the 7th Circuit Judge Rovner and the entire 7th Circuit Court of Appeals for defying their order.”

Lewis outlined how his church “has gone out of its way to follow CDC Guidelines,” including “having online services, outdoor services, and practicing all social distancing requirements.”

“We are even taking members’ temperatures on the way in our church doors,” he said. “We are not allowing our elderly to attend services.”

Republican House nominee Philanise White threw her support towards Lewis and the right to worship.

My support goes out to Pastor Courtney Lewis & the members of Cornerstone Baptist Church in Woodlawn #IL01 for the attack on his service recently by @chicagosmayor Our right to assemble & worship cannot be infringed upon by government or ANY entity! Time for a #NewChoiceBetterWay

Pastor Lewis has also beseeched the aid of President Trump and the US Department of Justice to correct “the grave miscarriage of the law.” It is an issue on which the President has deeply seated beliefs, an issue directly in combat with Lightfoot’s heavy hand.